Total U.S. agricultural exports in 2020 totaled about $ 146 billion, nearly 7% more than in 2019, the Department of Agriculture (USDA) reported.

The main driver of this increase in agricultural exports was the expansion of shipments of soybeans, corn and pork to China.

Meanwhile, US foreign corn sales to the world grew 20% to $ 9.2 billion, led mainly by a $ 1.1 billion increase in sales to China.

The rise in competitiveness was due to production shortages in Argentina and Ukraine.

In terms of the direction of foreign sales, Mexico and Japan continued to be the top two markets for US exports, while high domestic prices in China generated the highest value of US exports to China since 2013.

Pork exports were the other major contributor in 2020, up 11 percent.

This increase was led by a 75% growth in exports to China and a 7% advance to Japan, the number 2 market.

Agricultural exports to China were boosted by increased import demand following the significant reduction of the Chinese herd due to African swine fever (ASF).

While tree nut exports to the world declined 7% in 2020 due to lower sales to Hong Kong and the EU, they remained the third largest export for US farmers and ranchers.

Exports of processed vegetables fell $ 326 million in 2020. 67% of this decline is attributed to lower exports of potato chips, as the quick-service restaurant industry lost customers worldwide to edicts that stayed at home. 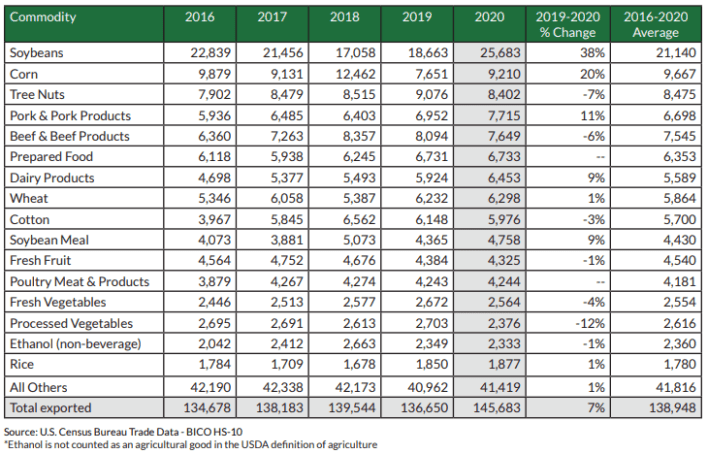 Other notable developments in 2020 included a 3% decline in cotton exports, to $ 6 billion, as sales were hit hard during the second quarter due to a reduction in demand and the use of factories derived from the coronavirus pandemic (Covid-19).

Total exports of livestock, poultry and dairy products increased by $ 765 million, an increase of 2% from last year, as lower exports of beef, hides and skins and poultry partially offset the gains in pork and dairy.