China leads the production of semiconductor chips in the world, according to data from the United Nations.

The electronics value chain, which includes consumer electronics and ICT, has been regionalized over the years, and China has become a major global production center for microelectronics.

Other outstanding producers are: South Korea, Singapore, Malaysia, the United States, Japan, Germany, the Philippines, the Netherlands, and Thailand.

In particular, the statistics for China add up the production of Hong Kong and Macao. 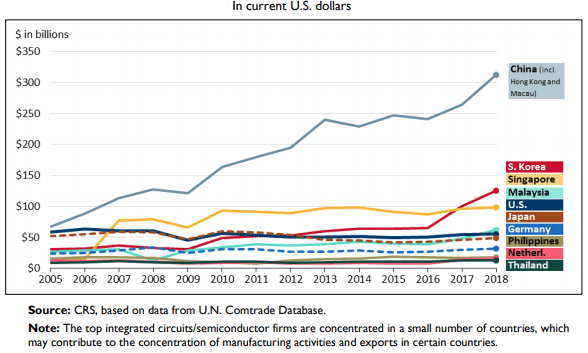 According to an analysis by the US Congress, the global trade in semiconductor chips involves cross-border design and manufacturing processes, and that trade may involve a chip crossing national borders multiple times in the product development cycle.

In 2018, Asia’s exports of integrated circuits / semiconductors, which are used in almost all electronic products, accounted for about 70% of the total value of exports, compared to around 50% in 2005.

In general, intermediate and final products can cross borders several times before final export, which can skew trade data.

Some of the largest IC/semiconductor companies are located in a small number of countries, which can contribute to the concentration of manufacturing activities and exports in certain countries.

Above all, China is becoming a major manufacturing center for key electronic components.

Between 2005 and 2018, China’s global share of the total exported value of printed circuits and semiconductors increased from 16 to 33 percent.

Although their share of the total exported value has increased, most of China’s added value comes from printed circuit boards.

However, based on the same analysis, trade data suggests that some of the GVC production in China may be shifting elsewhere, potentially in response to rising costs in China and the US tariffs imposed on Chinese imports since 2018.