The top 10 exporters of agricultural products in 2021 are the European Union, the United States, Brazil, China, Canada, Indonesia, Argentina, India, Thailand and Russia.

These ten exporters recorded external sales of agricultural products for a combined customs value of $1.509 trillion last year, according to data from the World Trade Organization (WTO). 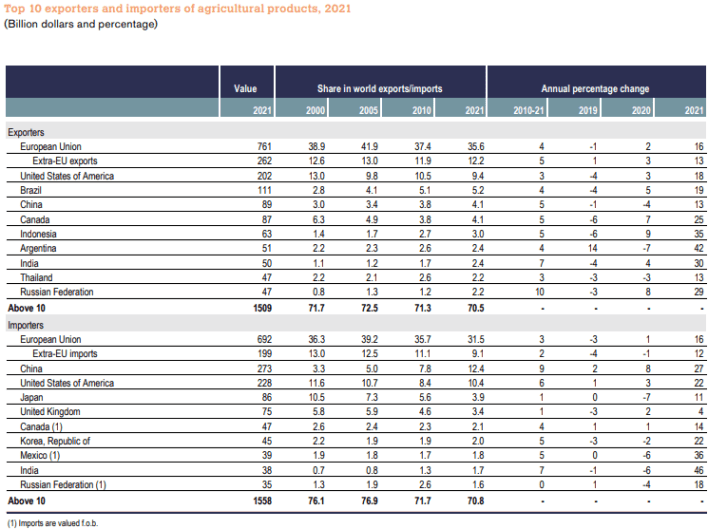 The Mosaic Company expects grain and oilseed markets to remain tight during 2022 and 2023.

This suggests that global stock-to-use ratios, already projected at 20-year lows, will remain under pressure.

The Mosaic Company is the world’s leading producer and marketer of concentrated phosphate and potash-based crop nutrients.

Through its broad product offering, the company is a single-source supplier of phosphate- and potash-based crop nutrients and feed ingredients. It serves customers in approximately 40 countries.

Historically high crop prices, coupled with fertilizer prices that have moderated since the post-Ukraine invasion rally, warrant a return to normalcy in nutrient applications.

In North America, the situation has improved markedly from the spring season.

As a result, fall nutrient application rates are trending toward normal levels, and this is expected to deplete carcass inventories.

Also, nutrient prices in Brazil remain historically high, but have declined to levels that encourage domestic shipments, which is expected to reduce year-end inventories to levels comparable to last year.

In India, government subsidies, particularly for phosphates, are expected to remain at levels that favor imports.

World prices for the key raw material inputs for concentrated phosphate products, including ammonia, sulfur and phosphate rock, have an effect on industry-wide phosphate prices and production costs.