Mexico topped the list of the main destinations for US corn exports, with 6.8 million tons from October 2019 to March 2020.

Corn is the most widely produced food grain in the United States, accounting for more than 95% of total production and use.

Behind Mexico, among the main destinations for US exports of this grain were: Japan, Colombia, Canada, South Korea and Guatemala.

United States corn exports fell from 28.1 to 18.3 million tons in the October to March periods of the last two cycles.

Three other major food grains are sorghum, barley and oats according to data from the Department of Agriculture (USDA).

Most of the corn crop provides the main energy ingredient in livestock feed. 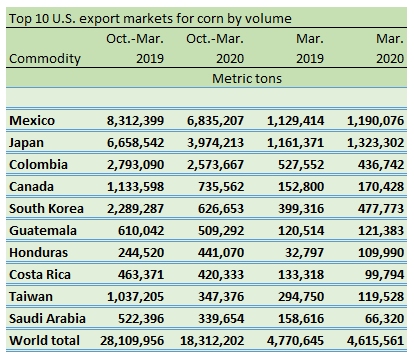 Corn is also processed in a wide range of food and industrial products, including cereals, alcohol, sweeteners, and derived foods.

Corn is grown in most states in the United States, but production is concentrated in the Heartland region (including Illinois, Iowa, Indiana, eastern parts of South Dakota and Nebraska, western Kentucky, and Ohio, and two thirds of northern Missouri).

Iowa and Illinois, the top corn-producing states, generally account for about a third of the United States crop.

Due to the provisions of the Federal Agriculture Improvement and Reform Act of 1996 that allows farmers to make their own crop planting decisions based on the most profitable crop for a given year, the area under cultivation of corn in the United States It has increased from a government-mandated low of 60.2 million acres planted in 1983 to close to or over 90 million since 2010.

Much of this growth in area and production is the result of expanding ethanol production, which now represents almost 40% of total corn use.

While the number of feed grain farms (those that produce corn, sorghum, barley, and / or oats) in the United States has decreased in recent years, the area per corn farm has increased.