The Economic Commission for Latin America and the Caribbean (ECLAC) estimates that in 2020 the extreme poverty rate stood at 12.5% ​​and the poverty rate reached 33.7% of the region’s population.

This means that the total number of poor people reached 209 million at the end of 2020; that is, 22 million more people than the previous year.

Of that total, 78 million people were in extreme poverty, 8 million more than in 2019. 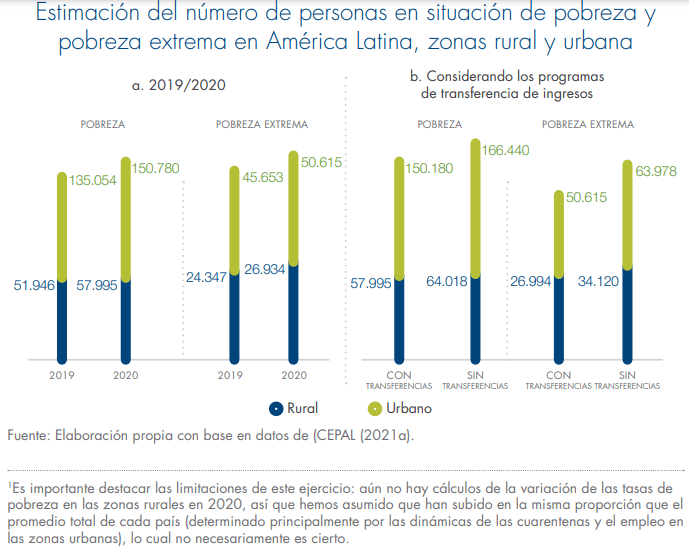 As in the case of GDP, the levels of both types of poverty would be even higher without the measures implemented by governments to transfer emergency income to households.

The ECLAC count indicates that the governments of the region implemented 263 emergency social protection measures in 2020.

These reached 49.4% of the population; that is, about 326 million people, with an additional expenditure estimated at 86,000 million dollars.

Without these measures, ECLAC projections show that the incidence of extreme poverty would have reached 15.8% and that of poverty 37.2%, equivalent to 98 million and 230 million people, respectively.

The category most affected by the greater unemployment generated by quarantines and other measures to curb the pandemic has been informal employment -prevalent in the region and made up mainly of women, youth, indigenous people and migrants- as well as the most vulnerable jobs to automation, which are generally the lowest rated.

“The unfair social organization of care and the lack of support during the pandemic has represented a decade-long setback in labor inclusion for women,” says ECLAC.

Unlike other sectors, such as services and commerce, employment in the agricultural sector has been less affected by the pandemic, but it should be taken into account that the sector has a high level of informal work and migrant and seasonal employment, on the all feminine, which has been quite affected.