Roberto Azevêdo announced his resignation as WTO Director-General, effective as of August 31, 2020.

Seven years ago, Azevêdo was elected to that position after competing in the last round of the electoral process with the Mexican Herminio Blanco and in a context in which the Doha Round remained (still is) stuck.

Instead, Azevêdo managed to push forward the Trade Facilitation Agreement (AFC), which could reduce the costs of international trade to a range of 12.5% ​​and 17.5% worldwide, according to estimates by the Organization for Economic Cooperation and Development ( OECD). 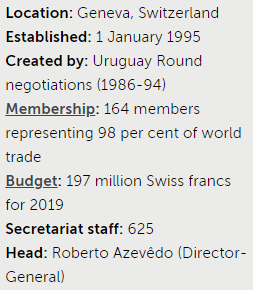 Meanwhile, according to calculations by the WTO itself, the global export earnings of the total implementation of the AFC could vary from 750,000 million dollars to more than 3.6 billion dollars per year and, for the period 2015-2030, could increase growth. of world exports by 2.7% annually and generate a rise in world GDP of more than 0.5% annually.

“This August I will complete seven years as Director-General of the WTO. And I have decided that I will resign my current position on August 31, 2020, shortening my second term in exactly one year, ”he said in a virtual meeting of all WTO Members.

The United States government has criticized the power that the WTO Appellate Body acquired, which has been dismantled and inoperative due to the US blockade to renew the panelists whose term of office expired.

In general, the United States has blocked the appointment of new panelists as a pressure measure to generate an internal reform to the WTO, with the purpose of reducing the number of members classified as “developing” and reducing their consequent benefits, as well as clarifying the binding provisions in judicial matters, eroding what is outlined as a system of “justice” and bringing it more to a “conciliatory” one through negotiations.

Azevêdo will leave office amid a trade war between the United States and China and numerous challenges in the multilateral trading system.

“We know that the WTO cannot remain frozen while the world around it changes profoundly. Ensuring that the WTO continues to respond to members’ needs and priorities is an imperative, not an option. The “new normal” that emerges from the COVID-19 pandemic will have to be reflected in our work here, “he said.

According to him, bringing his departure forward would allow Members to choose their successor in the coming months, without diverting political energy and attention from the preparations for the Twelfth Ministerial Conference (CM12), which is scheduled to take place in 2021.

“We must give my successor enough time not only to plan, together with you, the path for CM12, but also to see how this Conference adjusts to the projects they have for the future of the Organization,” he concluded. “The sooner the new CEO becomes operational, the better.”

Ecopetrol will allocate 80% of its investments to Colombia