Developed countries predominate in the list of the top 10 drug exporters in the world, eight of them European and with Germany at the fore.

According to a report by the Economic Commission for Latin America and the Caribbean (ECLAC), this group has not undergone major changes in the last decade, except for India’s entry in tenth place.

Other relevant drug exporters are: Switzerland, Ireland, Belgium, the United States, France, Italy, the Netherlands and the United Kingdom.

The joint participation of the 10 main exporters has remained stable, with about 80 percent. 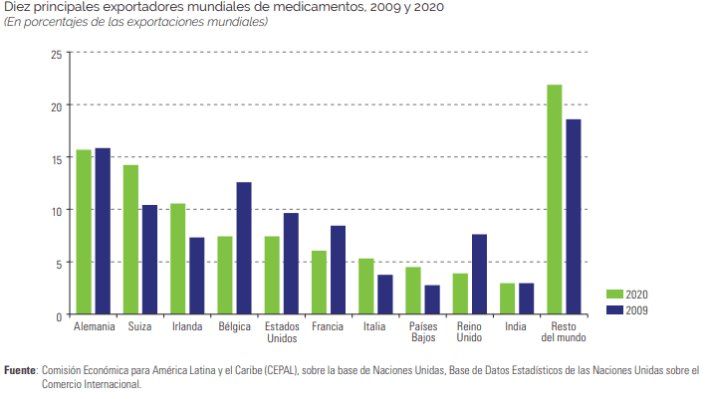 The region’s position in the trade of pharmaceutical products is persistently in deficit and the value of its imports in 2020 was six times that of exports.

World exports of pharmaceutical products (drugs and active ingredients) were around 712,000 million dollars in 2020, a figure equivalent to 4% of world trade in goods that year.

Of this total, 87% corresponded to drugs and the remaining 13% to active ingredients.

While the value of world exports of goods fell 7.5% in 2020 due to the Covid-19 pandemic, the value of pharmaceutical exports increased 10 percent.

The region’s trade pattern reflects the main characteristics of its pharmaceutical industry and market.

The demand for innovative drugs (including biopharmaceuticals) is met mainly through extra-regional imports by transnational companies.

On the other hand, ECLAC reported that most generic drugs are produced in companies that operate locally, but with a growing use of imported active ingredients.

In fact, in recent decades there has been a tendency to abandon the production of active principles.

Thus, the high dependence on the extra-regional supply of drugs with current patents and active ingredients explains the persistent trade deficit.