The world economy slowed in the first half of 2021 amid rising Covid-19 infections, uneven vaccination progress and the adoption of restrictive measures, the European Central Bank (ECB) described.

On the one hand, in advanced economies, the increase in new infections led to a tightening of restrictive measures in early 2021.

In late spring, a rapid rollout of vaccination allowed some key economies to gradually reopen, bringing some relief to the world economy.

At the same time, however, the pandemic worsened in emerging market economies, where progress with vaccinations has been slowest. 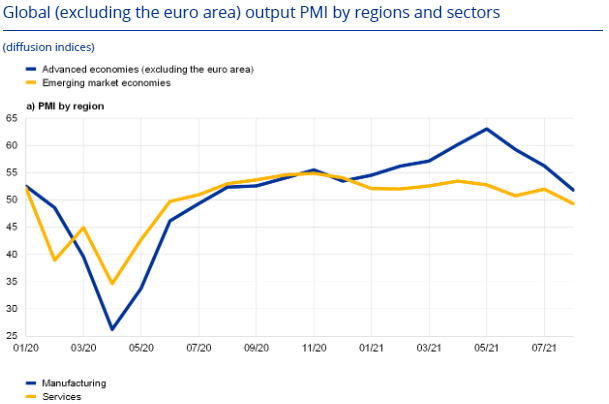 As a result, the ECB indicated, real growth in the world economy (excluding the euro area) slowed to 0.8% in the first quarter of the year and to an estimated 0.6% in the second quarter, after 2.5% in the last quarter of 2020.

Compared with the macroeconomic projections prepared by Eurosystem experts in June 2021, activity in the second quarter is estimated to have been in line with projections in emerging market economies, but weaker in advanced economies, as the growth in the United States was less dynamic than projected.

The ECB interprets survey indicators as suggesting a moderation in the pace of recovery in global economic activity, particularly among emerging market economies, amid persistent supply bottlenecks.

In August, the global production composite purchasing managers index (PMI) declined for the third month in a row, falling to 51.3 from 54.9 in July.

While the index remains in expansive territory, it shows some moderation in growth compared to the second quarter.

Composite production PMI declined for both advanced and emerging market economies, with the latter falling below the expansionary threshold for the first time since June 2020 (to 49.3 from 52.0 in July).

Across all components, the services production PMI fell sharply from its peak of 60.5 in May to 51.5, falling especially in advanced economies.

The manufacturing PMI also declined, declining below the expansionary threshold for emerging market economies, although it remained slightly above that threshold overall (50.7, down from 53.2).

While the world economy continues to face a two-way recovery, with advanced economies recovering at a faster rate than emerging market economies, recent PMIs point to a reduction in divergence between the two regions and also between sectors. .