Advances in one technology foster progress in others.

For example, according to the UN, the invention of new materials is transforming energy production and storage, additive manufacturing and 3D printing; artificial intelligence (AI) increasingly enables automation, online search engines and social media platforms; and rapid increases in computing power are enabling advances in genetics, nanotechnology, blockchains, and cryptocurrencies.

Many of the major providers of these technologies come from the United States, which is home to major cloud computing platforms.

China is also a major producer, particularly of 5G, drones, and solar photovoltaics.

For each of the technologies, indicates UNCTAD, these two countries are also responsible for 30 to 70% of patents and publications.

Frontier technologies are a set of new technologies that take advantage of digitization and connectivity that allow them to combine to multiply their impacts.

These technologies can be used to boost productivity and improve livelihoods.

AI, for example, combined with robotics can transform business and production processes.

As a group, these technologies already represent a $ 350 billion market, and one that by 2025 could grow to more than $ 3.2 trillion, according to UNCTAD projections.

Currently, only a few countries create cutting-edge technologies, but all countries need to prepare for them.

To assess national capacities to equitably use, adopt and adapt these technologies, this report has developed a “readiness index”. 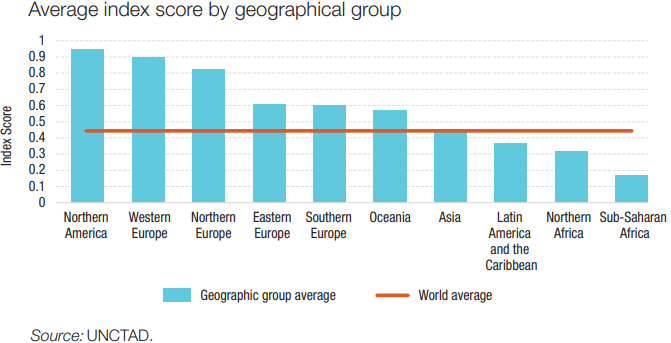 According to this index, the best prepared countries are the United States, followed by Switzerland, the United Kingdom, Sweden, Singapore, the Netherlands and the Republic of Korea. The list also ranks high for some transition and developing economies, such as China at 25th and the Russian Federation at 27th.

Most of the least prepared countries are in sub-Saharan Africa and developing countries in general.