The United States leads the world in oil and natural gas production and is the second largest energy producer and consumer in the Asia Pacific Economic Cooperation (APEC) forum.

According to an APEC report, the high levels of U.S. oil and natural gas production are primarily the result of technical innovations, including those that enabled commercial oil and gas production from shale formations.

The energy systems of the three North American economies are well integrated with robust energy trade between the United States, Canada and Mexico. 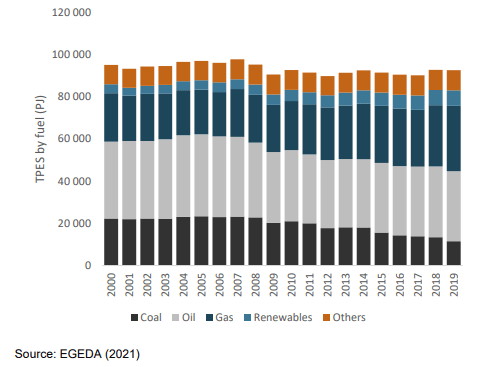 Located in North America, between the Atlantic and Pacific oceans, the United States is the world’s third largest economy in terms of land area and population.

At the same time, the country produces the second largest Gross Domestic Product (GDP) in the world, measured in Purchasing Power Parity (PPP).

The United States has one of the highest levels of final energy demand per capita in APEC.

In terms of energy intensity, the United States has the sixth highest level in APEC, at just under 3.0 PJ per $1 billion of GDP (PPP).

These relatively high levels of economy-wide energy intensity and per capita energy use appear in all U.S. sectors; however, there are large variations among the economies of the 50 states.

Generally speaking, the best solar resources are found in the continental southwestern United States, as well as Hawaii.

For wind energy, the greatest potential extends from North Dakota to Texas, as well as offshore on both coasts and in the western Gulf of Mexico.

Geothermal potential is concentrated in the western half of the continental United States, and biomass is widely available across the continent.