The United States contributed 50.8% of the Foreign Direct Investment (FDI) received by Mexico in the first half of 2021, the Ministry of Economy reported this Friday.

Then the following countries were located in terms of their share of the total FDI captured by Mexico: Spain, 9.1%; United Kingdom, 5.9%; Germany, 5.9%; Luxembourg, 5.3 percent.

Other countries contributed the remaining 23.0%. 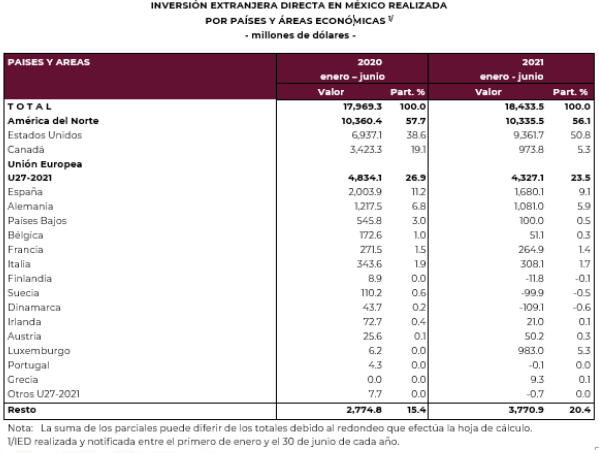 In 2020, Mexico became the United States’ third-largest trading partner in goods and services and the second-largest in goods alone.

Regarding bilateral trade, it grew 482% between 1993 and 2020, and Mexico is the second largest export market in the United States.

At the same time, the United States is the main source of Foreign Direct Investment in Mexico.

According to the US State Department, the economic recession due to the global Covid-19 pandemic was the main reason behind the contraction, with Foreign Direct Investment declining 11.7 percent.

The austere fiscal policy in Mexico resulted in a primary surplus of 0.1% in 2020.

The government has defended the independence of the central bank (Banco de México).

The administration remained committed to reducing bureaucratic spending to finance an ambitious social spending agenda and priority infrastructure projects, including the Dos Bocas Refinery and the Maya Train.

The Framework Definition of Foreign Direct Investment of the Organization for Economic Cooperation and Development (OECD) includes updates to the published information.

In this sense, paragraph 665 states that “It is possible that once the estimates referring to a period (for transactions) or a specific date (in the case of positions) have been published, additional information may be available that result in revisions to initial estimates. This new information may be a consequence of the declaration of higher quality data by the informants, of improvements incorporated to the data in the compilation process or of other types of investigations that are carried out. »

Furthermore, in paragraph 659 it is stated that «To minimize the risk of underestimation of FDI figures, initial estimates require several updates and validations.»