Yokohama topped the list of the world’s best ports in 2020, according to the Container Port Performance Index (CPPI), conducted by the World Bank and IHS Markit.

In general, this index combines data on ships, their calls in ports and the loads they load and unload, as well as the time they spend in ports.

Thus, the first version had data for 2019 and the first half of 2020, and was dominated by ports in East Asia, led by Yokohama in Japan, which was ahead of the King Abdullah port in Saudi Arabia and Qingdao in China.

In Europe, the best classified port was Algeciras in Spain with 10; in South Asia, it was Colombo in Sri Lanka at 17; and in the America, Lázaro Cárdenas in Mexico at 25.

The only other North American port in the top 50 was Halifax in Canada. In Africa, the highest ranked port was Djibouti.

Now UNCTAD has used raw data from the CPPI to analyze the relationship between port performance and the time ships spend in them.

So there are clear economies of scale: the more containers there are to load and unload (a larger “port scale size”), the fewer minutes it takes to load or unload a container. 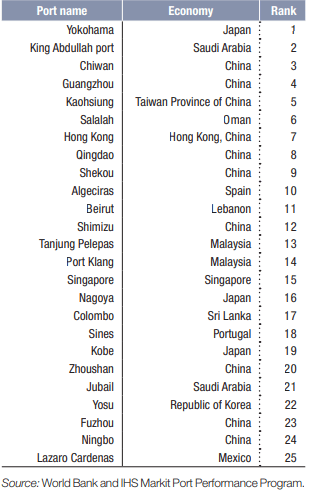 However, according to UNCTAD, the total time in port increases with the size of the call, so it is reasonable to compare ports or countries within the same range of call sizes.

Calls to ports where more containers are loaded or unloaded will take longer to handle, but will also be faster for each individual container movement, so the correlation between hours in port and handling speed will be slightly negative.

For five of the nine call size ranges, the fastest handling is in the Chinese province of Taiwan, followed by Japan for two ranges, and Malaysia and Hong Kong, China for one range each.