The ports of Santos (Brazil) and Manzanillo (Mexico) topped the list of the top 20 ports in Latin America and the Caribbean.

This classification of ports or port areas is based on the behavior of international trade in 2020, according to data from ECLAC.

In terms of trade by maritime containers (sum of exports and imports), in 2020 there was a drop of -4.0% compared to the previous year, in a sample of 88 ports and port areas in the region, with almost all the subregions showing negative results compared to 2019. 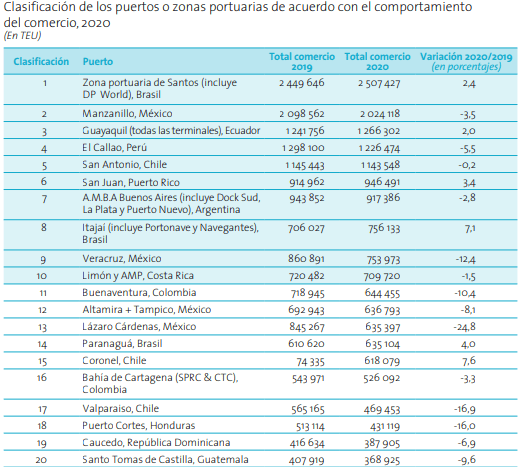 According to the data presented, the East Coast of South America (CEAS) recorded a -0.2% drop in trade activity in ports (including Paraguay) in 2020.

The COAS also presented a decrease in its trade, with a decrease of 3.1% in 2020 compared to the previous year.

For its part, in Central America, the Caribbean coast presented stronger falls in relation to the Pacific coast, with a decrease in trade via containers of 5.7% and with an increase, the only one of the subregions, of 3.1% in the Pacific Coast.

In Mexico, the decline in the Gulf coast was 9.8% and in the Pacific coast it was 8.0 percent.

Finally, in Panama there were the largest drops in trade, the Caribbean coast reported a drop of -15.1% and the Pacific coast there was a decrease of 30.4 percent.