Peñasquito, from Newmont, and Saucito, from Fresnillo plc, ranked as the largest silver mines in Mexico in 2020, reported the Mexican Mining Chamber (Camimex).

Later, the San Julian mine, also owned by Fresnillo plc, was placed. It’s in Chihuahua and it produced 13.31 million ounces.

With annualized information from Inegi in 2020, Mexico’s silver mining production was 180.2 million ounces, 4.0% less than that corresponding to 2019. 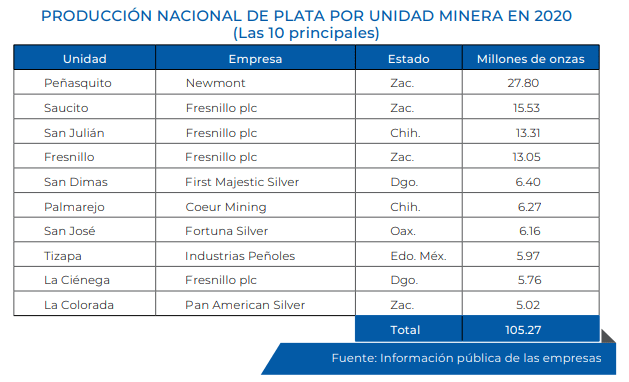 By federal entity, Zacatecas kept the first position, with a participation of 39%; The largest silver mines in the country are located in this state: “Peñasquito” from Newmont and “Saucito” and “Fresnillo” from Fresnillo plc.

The production of this entity increased 2.9%, observing reductions in most of the mines due to the pandemic; with exceptions such as “Peñasquito”, which managed to grow its 2019 production four times.

Chihuahua ranked second with a contribution of 23.9%, had an increase in its production of 10.1%, highlighting among the scarce mines that increased production “Cerro Los Gatos”, from Dowa-Sunshine Silver Mining, which is in the process of reaching its Commercial Operation.

On the other hand, there were decreases in volumes in the “Palmarejo” mines of Coeur Mining and “Dolores” of Panamerican Silver, as well as “Concheño” and “Ocampo” of Minera Frisco.

In third place, the state of Durango was located with a participation of 13.0%, a decrease of 11.3%, although there were increases in the production of the mines: “El Herrero” from Minas de Bacis, “Guanaceví” from Endeavor Silver and “San Dimas” by First Majestic, among others.

By company, Fresnillo plc was consolidated as the main producer of this metal, it participates with 29.4% of the national production; They are followed by Newmont, Grupo México, Industrias Peñoles and First Majestic.

Other outstanding silver mines in the past year are: Fresnillo, from Fresnillo plc; San Dimas, from First Majestic; Palmarejo, from Coeur Mining; San José, from Fortuna Silver; Tizapa, from Industrias Peñoles; La Ciénega, from Fresnillo plc, and La Colorada, from Pan American Silver.

Mexico captured US $ 1,483 million of FDI in metallic mineral mining