By far, China was in the top 10 of the world’s top 10 pork consumers in 2020, according to data from the United States Department of Agriculture (USDA), taken up by Comecarne.

The population of China consumed 43 million 050,000 tons of pork in 2020 and that amount represented a decrease of 4% year-on-year.

But that volume comprised 44.3% of world pork consumption last year.

After China, the European Union registered a consumption of 19 million 668,000 tons, a contraction of 3.7% per year. 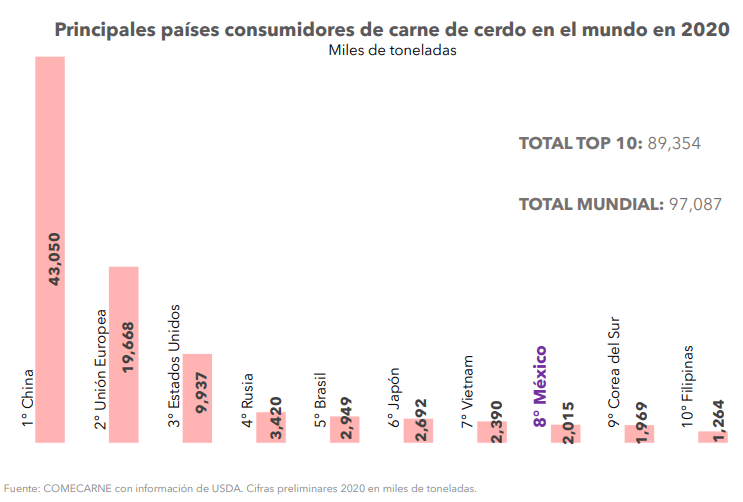 With a year-on-year decline of 0.4%, the United States was in third position, where its inhabitants consumed 9 million 937,000 tons.

The following positions were for: Russia, Brazil, Vietnam, Mexico, South Korea and the Philippines.

According to the Chinese company Xiangtai Food, the rapid growth of the swine industry in the People’s Republic of China has been driven in large part by strong economic growth, continued urbanization and rising disposable income.

China is the world’s largest pork production and consumption market.

There, pork is deeply ingrained in culture and diet.

Although China’s pork production volume has historically grown steadily, there has been a constant gap between supply and demand for pork.

Since 2018, China has witnessed a severe African swine fever epidemic.

In 2019, China’s Ministry of Agriculture and Rural Affairs (MARA) implemented a three-year mission plan to stabilize pig production and supply.

By the end of 2019, MARA had implemented a program called Large Agricultural Enterprises Lead 10,000 Households in Pig Farming to alleviate poverty in 16 less developed cities in provinces such as Hubei and Sichuan.

With an investment of $ 7.1 billion (RMB 50 billion) by 15 large agricultural companies, the program is expected to add 22 million pigs slaughtered per year.

The key drivers of the PRC pork industry can be analyzed in terms of supply and demand.

Overall, the growing demand for fresh pork and packaged pork products is due to rising disposable incomes and living standards, continued urbanization, expanding middle class, the important role of animal protein in the food consumption, the importance of pork as a source of animal protein and the growing demand for safe and high-quality products.

As a result of changes in consumer behavior and growing demand, producers are experiencing accelerated industrial concentration and a trend towards vertical integration.