The Netherlands, Germany and France were placed in the lead of the exporting countries of aagri-food and fishing products of the European Union, according to a report by the Government of Spain.

In 2020, the Member States of the European Union exported agri-food and fishing goods (AAP) worth 537.16 billion euros. 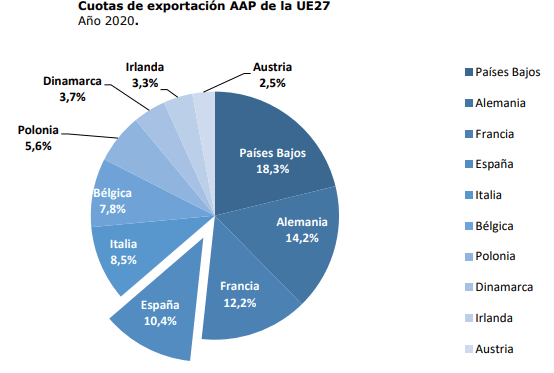 Therefore, the balance was positive, of 42,046 million euros.

Spain, with a figure of 53,848 million euros, remained the fourth largest exporter of agri-food and fishery products in the EU27 in 2020.

As of September 2021, European Union consumer spending was increasing, although consumers remained somewhat cautious in light of the evolution of the pandemic, a report by the European Central Bank (ECB) indicated.

Also the labor market is improving rapidly, offering the possibility of higher income and higher expenses.

At the same time, unemployment is declining and the number of people on job retention schemes has dropped by some 28 million from last year’s peak.

The recovery in domestic and global demand is further fueling optimism among companies, which is supporting business investment.

But there is still a long way to go before the damage to the economy caused by the pandemic is overcome.

There are still more than 2 million fewer people employed than before the pandemic, especially among the youngest and least skilled.