The SAT reported a 16.5% year-on-year increase in cash flow collection from foreign trade operations in Mexico, to 738.738 million pesos from January to September 2021.

In Mexico, people who introduce goods to the national territory or extract them from it are obliged to pay taxes on foreign trade and to comply with non-tariff regulations and restrictions and other regulatory measures for foreign trade.

The foregoing also includes people who are under a tariff refund or deferral program in the cases provided for in articles 63-A, 108, section III and 110 of the Customs Law. 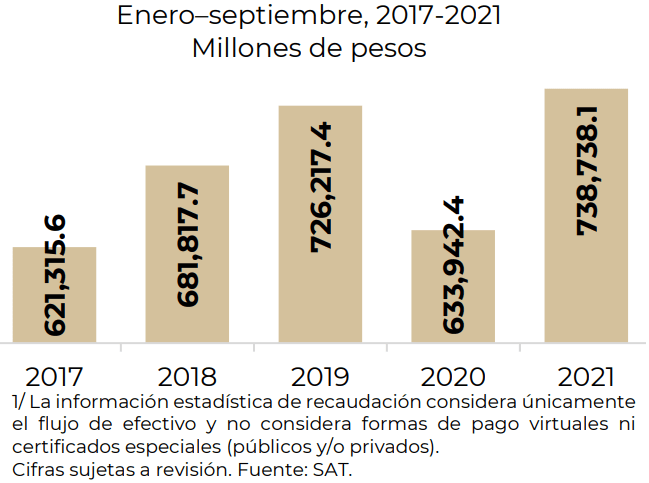 At the same time, the Federation, federative entities, municipalities, territorial demarcations of Mexico City, parastatal entities of the Federal Public Administration, productive companies of the State, private charitable institutions and cooperative societies must pay foreign trade taxes notwithstanding that according to other laws or decrees do not cause federal taxes or are exempt from them.

In addition, the persons and entities referred to in the preceding paragraphs will also be obliged to pay the compensatory fees in those customs regimes determined by the Ministry of Economy, in accordance with the Foreign Trade Law, through the provisions that for such purposes are published in the Official Gazette of the Federation.

The SAT will determine the amounts that the people who carry out customs operations will pay in return for those who provide these services.

This payment, including the value added tax transferred due to the consideration, will be credited against the amount of the customs processing fees referred to in articles 49 and 50 of the Federal Law on Rights and may not be higher than those mentioned. Rights.

The accreditation referred to in this paragraph will in no case give rise to a creditable balance in favor against other operations, or to a refund. The rights and considerations referred to in the preceding paragraph shall be jointly learned before the authorized offices.

The Tax Administration Service will determine by rules the percentage that of the total corresponds to rights, individuals and the value added tax transferred due to the consideration.