What is the role of regional trade agreements? The Food and Agriculture Organization of the United Nations (FAO) provides the following answer.

In recent decades, most countries have entered into trade agreements both within the multilateral framework of the WTO and at the regional level.

In parallel with multilateral trade negotiations, the number of regional trade agreements (RTAs) in force increased from less than 25 in 1990 to more than 350 in 2022 (this number includes only those RTAs in force that have been notified to the WTO, as not all RTAs have been notified). 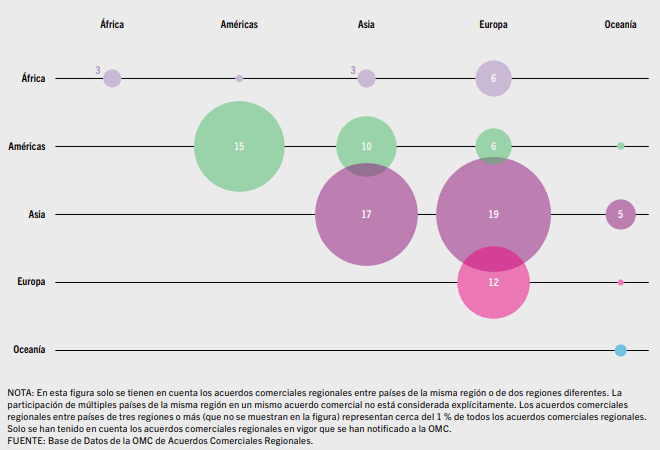 Counting RTAs can give only a rough idea of regionalization patterns, as RTAs, broadly defined as “mutually preferential trade agreements,” can be bilateral, regional, and interregional.

Depending on the number and economic size of RTA signatories, the importance of these agreements may vary and their number may be skewed upward or downward by the formation of larger integrated areas (e.g., the expansion of the European Union caused earlier agreements between current EU members to lose their validity) or the break-up of previously integrated areas (e.g., the exit of the United Kingdom of Great Britain and Northern Ireland from the European Union and the subsequent renegotiation of bilateral agreements).

Likewise, the degree of economic integration negotiated in each RTA can vary considerably, ranging from vague declarations of intent to economic or customs unions and common markets.

However, some general parallels can be drawn between the patterns of RTAs and those of trade.

For example, countries with greater connectivity to the global trade network also tend to be signatories to a greater number of RTAs.

African countries, which tend to be poorly connected to the trade network, have so far concluded only a few RTAs that have been notified to the WTO.

The role of RTAs in promoting regional trade integration is reflected in the fact that almost half of the RTAs currently in force were concluded by countries in the same region.

Only Africa and Oceania have relatively few RTAs covering only countries in their respective regions.

Less than 3% of RTAs (notified to the WTO) are between African countries only.

In fact, both regions tend to trade more globally and less domestically.

In the past, RTAs were usually concluded between countries that were neighbors or had a common history.

However, there are new approaches, such as RTAs between countries on different continents and large RTAs involving many countries with large shares of world trade.