The recovery in world trade continued in the first quarter of 2021, highlighted the European Central Bank (ECB).

So far, the available data point to a continued recovery in world trade.

For the ECB, merchandise trade flows surprised to the upside in January and continued to drive the recovery in international trade.

Meanwhile, trade in services showed signs of improvement, but remained at moderate levels at the end of 2020 due to lockdowns and travel restrictions.

The ECB’s internal trade monitoring tool, based on weekly and monthly short-term trade indicators, notes that the recovery in world trade continued in the first quarter of 2021.

Already before, world economic activity and trade experienced a sharp rebound in the second half of 2020, driven mainly by the manufacturing sector, while services activity was and continues to be moderate.

Then, global economic activity recovered rapidly in the third quarter of 2020, as a result of the improvement in the epidemiological situation and the relaxation of associated containment measures, as well as the substantial support provided by economic policies at the time. peak of the crisis. 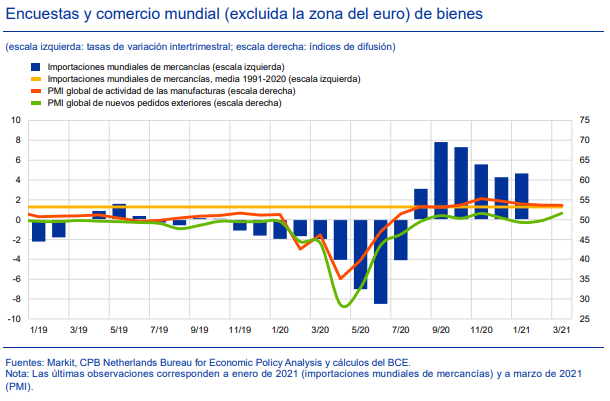 Despite the slowdown in the last quarter of the year, which reflected the worsening of the pandemic, the pace of the global economic recovery in the second half of 2020 was, in general, more intense than initially estimated, according to the ECB.

However, the volume of world trade slowed in February, growing at a 0.3% month-on-month rate, affected by results in the United States and China, reported the Bureau of Economic Policy Analysis (CPB) of the Netherlands.