The construction industry registered the largest M&A agreement in Latin America: the acquisition from CPP Investments (Canada) of 40% of the capital stock of IDEAL (Mexico), a company specialized in infrastructure construction, for 2.5 billion dollars .

At the end of 2019, an agreement was signed to transfer part of the ownership of the IDEAL company to two Canadian pension operators, CPP Investments and Ontario Teachers’ Pension Plan. 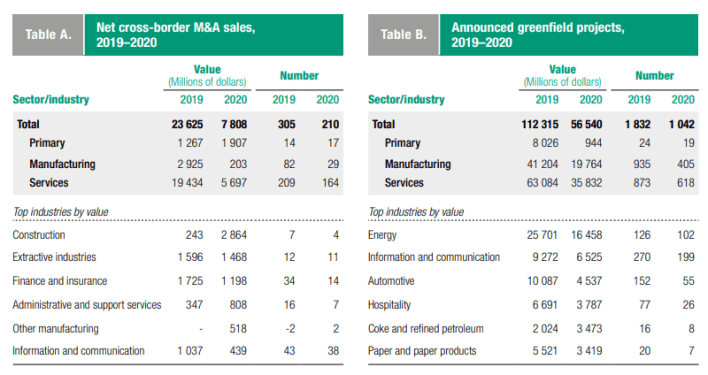 Meanwhile, the CPPIB was established in 1997 under the Canada Pension Plan Board of Investment Act, with responsibility for ensuring the long-term sustainability of the Canada Pension Plan (CPP). It is accountable to Parliament and federal / provincial finance ministers; however, it operates at a distance from the federal and provincial governments.

According to UNCTAD, Latin America registered an extraordinary reduction in FDI of 73,000 million dollars in 2020 (-45% to 88,000 million), since it suffered the worst contraction of economic activity (-8%) in the world in growth.

Since the fall in commodity prices in late 2014, economic expansion in Latin America had slowed from an already fairly low level.

The economic crisis put further pressure on the already downward trajectory of FDI in the region.

Thus, cross-border M&A activity plummeted 67%, to $ 7.8 billion, as both manufacturing and services suffered sharp contractions, only partially offset by higher activity in the primary sector.

The number of announced greenfield projects decreased 43%, as a result of fewer commitments in the automotive, hotel and energy industries, while the announced international project finance agreements were more resilient, only 10% less, as the announcements in renewables la Energy (which represents more than half the number of projects) increased marginally.