The peso closed the session with an appreciation of 1.29% or 29.6 cents, trading around 22.69 pesos per dollar, before a general weakening of the dollar, whose weighted index showed a decline of 0.26 percent.

In the exchange market, the most appreciated currencies were those of emerging economies, with the Brazilian real in first place, advancing 2.94%, the South African rand in second place, with 1.86% and the Mexican peso in third place.

During the session, a moderate increase in risk appetite was observed, which allowed gains in the foreign exchange market and gains in most of the main indexes in the American session. In the United States, the S&P 500 closed with an advance of 0.50%, while the Nasdaq index advanced 0.95 percent.

This was mainly due to the following factors:

Positive economic indicators for the manufacturing sector were published in the United States. The manufacturing ISM for June increased from 43.1 to 52.6 units, reaching above the expansion threshold for the first time since February, being in turn the highest level since April 2019.

In the interior it is highlighted that the component of new orders rose from 31.8 to 56.4 points, as a result of the reactivation of the industry during the month. It should be noted that the positive impact of the indicator was limited, since the accelerated growth of new cases of coronavirus was concentrated in the second half of June and a further deterioration of the ISM indicators in the United States cannot be ruled out.

There is an expectation that positive indicators for the US labor market will be released tomorrow during June. Nonfarm payroll is expected to show the creation of more than 3 million jobs and a decrease in the unemployment rate from 13.3% to 12.5 percent.

In addition, initial jobless claims are expected to decrease from 1.48 million to 1.35 million in the week ending June 26.

Financial markets reacted to news of favorable tests for a coronavirus vaccine from pharmaceutical companies Pfizer Inc and BioNtech SE. The expectation of a vaccine that allows the normalization of economic activity in subsequent months could generate optimism in the following sessions.

It should be added that in previous weeks other advances in the development of a vaccine have been announced, so the optimism is likely to be short-lived. 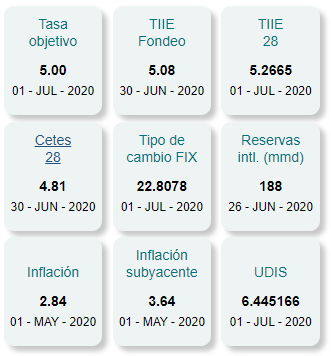 In Mexico, the publication of remittances during May stood out, which surged surprisingly at an annual rate of 2.97% after showing a decline of 2.58% in April, the month of the greatest impact of the pandemic. Family remittance income was $ 3,379.42 million, supported by a 4.01% increase in the number of transfers.

During the month, remittances tend to rise seasonally due to Mother’s Day, as well as the start of temporary work programs in the agricultural sector. Likewise, remittances are likely to increase due to an effort by migrants to send resources to relatives due to the impact of the recession in Mexico.

On the other hand, the survey of private sector specialists carried out by Banco de México was also published in Mexico. The survey shows a deeper expected drop in GDP during 2020 of 8.8% compared to the previous survey that anticipated a contraction of 7.99 percent.

The specialists also raised their growth forecast for 2021 from 2.20% to 2.80%. It is important to note that the downward adjustment in the 2020 expectation was 0.8 percentage points, while the upward revision for 2020 was 0.5 percentage points, which implies a deeper fall in the current year and a slower recovery in the following year.