The peso begins the session with few changes, showing a minimum appreciation of 0.01% and trading around 22.55 pesos per dollar, as optimism is observed in the exchange market, where most currencies gain ground against the dollar.

This is because in Europe the main economies are close to reaching an agreement for a fiscal stimulus of 750 billion euros. On the other hand, the market is also alert to the publication of the results of the phase 1 of the experimental vaccine against Covid-19 that is being developed by AstraZeneca and the University of Oxford.

The publication of positive results would favor gains for the financial markets globally.

In the United States, a new fiscal stimulus package is being negotiated that is speculated to be as high as $ 1 trillion. Meetings at the White House will begin today, and details are likely to be released during the week, as part of the current stimulus expires on July 31.

On the other hand, Ecuador reached an agreement with its main holders of sovereign debt (debt issued in foreign currency) in its 10 series for a total of 17.4 billion dollars.

The agreement sets a precedent for other countries that could initiate debt restructuring processes during the current economic crisis.

The peso and indicators

During the session, the publication of relevant economic information for the markets is not expected, while some data are highlighted during the week.

On Wednesday the 22nd, retail sales for May will be announced in Mexico, while on Thursday the 23rd, the inflation for the first half of July will be published.

Finally, on Friday the 24th the May IGAE will be published. In the United States, the initial requests for unemployment support from the previous week will be relevant, data published on Thursday, as well as the leading PMI indicators for July for the manufacturing and services sectors that will be published on Friday.

Among the currencies that are gaining ground this morning, the euro stands out with an advance of 0.16%, reaching a maximum of $ 1.1468 per euro, its highest level since March 9. 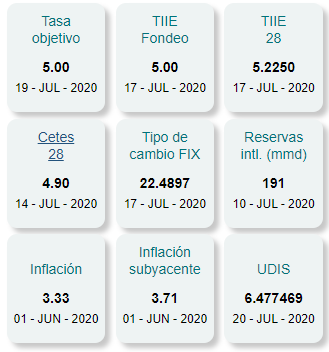 In the commodities market, silver shows a 1.54% gain due to the fact that it is considered a safe haven and in view of the expectation of lower production due to the coronavirus crisis. In one year silver has an increase of 19.93% and since the beginning of the year of 9.83 percent.

Today, the exchange rate is expected to trade between 22.43 and 22.75 pesos per dollar.

To cover a depreciation of the peso beyond 23 pesos per dollar, a call option, with an exercise date within 1 month has a premium of 1.83% and represents the right but not the obligation to buy dollars in the level mentioned above.