The peso closed the session with an appreciation of 0.59% or 13.2 cents, trading around 22.31 pesos per dollar, before a return of risk appetite to global financial markets.

The peso and the circumstances

The factors that allowed the appreciation of the weight were the following:

News about advances of two pharmaceutical companies in the development of a coronavirus vaccine.

The optimism was evident in the capital markets, where the main indexes in Europe registered gains of more than 1.5% on average, while in the United States the indexes advanced on average about 0.9 percent.

In the exchange market, the weighted index of the dollar registered a fall of 0.36%, falling for the second consecutive session.

Quarterly reports from companies in the financial sector in the United States, which showed that earnings and earnings per share exceeded market expectations, despite significant increases in reserves to cover possible increases in customer delinquencies.

Increases in oil prices, after the publication of the weekly EIA report.

According to the report, in the week ending July 10, commercial oil inventories in the United States fell 7.49 million barrels.

The report also reported that the implicit demand for energy increased during the week, leading total demand to show an increase of 360 thousand barrels per day to 18.48 million barrels per day.

For now, the data shows that the resurgence in coronavirus cases has not had an immediate impact on demand for crude in the United States.

The price of the WTI registered an increase of 1.94%, reaching $ 41.07 per barrel, advancing for the second consecutive session.

The currencies most appreciated during the session were those of countries that produce raw materials and crude oil, such as the Norwegian krone, which was the most appreciated currency, advancing 1.41%, followed by the South African rand, which advanced 0.99%, and the Canadian dollar, which showed an appreciation. 0.78 percent.

The Swiss franc, being a safe-haven currency, was the most depreciated, falling 0.50%. It should be added that with the appreciation of 0.59%, the Mexican peso was ranked as the sixth most appreciated currency in the basket of major crosses. 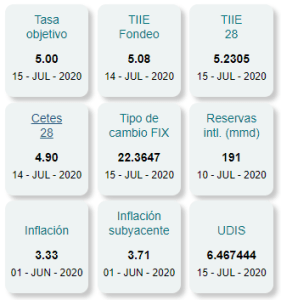