The peso begins the session with an appreciation of 0.32% or 8.2 cents, trading around 21.85 pesos per dollar, before a return of the weakness of the US dollar against its main crosses.

If this trend continues, the exchange rate is likely to approach the key support of 21.50 pesos per dollar.

The dollar-weighted index shows a 0.19% decline, while market participants are waiting for the Federal Reserve to make its monetary policy announcement at 1:00 p.m., where it is likely to keep the exchange rate unchanged. interest in your minimum range of 0.00-0.25 percent.

The announcement will be preceded by a press conference by the President of the Federal Reserve, Jerome Powell, in which he will present his vision on the economy and the policies that the bank will apply in the long term.

The depreciation of the dollar is due to the fact that, in addition to the expectation of a highly accommodative monetary policy in the United States, the markets anticipate that other regions of the world could have a more accelerated economic recovery, in particular Europe.

The price of gold is trading laterally, showing a 0.12% drop and standing at $ 1,956.20 per ounce. In the following sessions, the price is likely to continue its upward trend, overcoming the barrier of $ 2,000 per ounce.

For its part, the price of WTI oil registers an advance of 1.15%, reaching $ 41.51 per barrel, although this is mainly a correction to yesterday’s losses and a reaction to the weakness of the dollar this morning.

Regarding economic indicators, in Mexico the Quarterly Indicator of State Economic Activity (ITAEE) of 1Q 2020 was released, with falls in 15 of the 32 states of the country. It should be noted that the pandemic only had a partial impact on the economy in that quarter.

The greatest quarterly decreases were observed in the states of Coahuila (3.87%), Jalisco (3.39%) and Baja California Sur (3.12%). Mexico City showed a decrease of 1.74%, while the state of Nuevo León did not fall at a quarterly rate, advancing 0.13 percent.

At an annual rate, the Nuevo León economy observed a decline of 1.17%, due to the weakness of the state at the end of 2019.

The dynamism in the economic activity of Tabasco stands out, since since the second half of 2019 it maintains a behavior opposite to that of most states, which could be related to the greater public investment that has been allocated to it.

It should be remembered that the country’s GDP in 1Q2020 registered a quarterly drop of 1.2%. The exchange rate did not react to the publication of the ITAEE.

On the other hand, in the United States, the advanced data of the trade balance were published, corresponding to June.

Exports grew at a monthly rate of 13.9% and imports advanced by 4.8% monthly, according to seasonally adjusted figures.

On August 5, the official information will be published, which updates the trade by country, including Mexico. 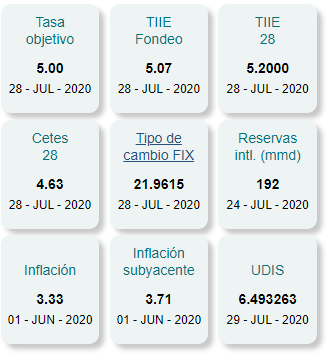 To hedge against a depreciation of the peso beyond 22.50 pesos per dollar, a call option, with an exercise date within 1 month, has a premium of 1.46% and represents the right but not the obligation to buy dollars in the level mentioned above.