The peso begins the session with few changes compared to yesterday’s close, showing a moderate appreciation of 0.14% and trading around 22.41 pesos per dollar.

In the foreign exchange market, most currencies gain ground against the dollar in a partial correction to Thursday’s losses.

During the last two weeks, although volatility episodes have been observed, the exchange rate has quoted bounded in a channel between 22.20 and 22.90 pesos per dollar most of the time, showing a lateral behavior, that is, without trend.

This is probably the result of the summer effect, due to a reduction in the volume of operations in global financial markets.

It is important to note that the behavior of the exchange rate also reflects indecision on the part of market participants, who are waiting for more relevant economic information, particularly the economic growth figures for Mexico and the United States for the second quarter and that will be published on Thursday, July 30.

A mixed performance is also observed in the capital markets in Asia and Europe, while the futures market points to a moderate gain in the main US indexes, but only as a result of a correction to yesterday’s losses.

It should be noted that Anthony Fauci, director of the National Institute of Allergy and Infectious Diseases in the United States, indicated at a conference that a Covid-19 treatment is very likely to be approved in late August, which could prevent infected people require hospitalization.

This could generate optimism during the US session.

A return to risk aversion cannot be ruled out, as there are still doubts regarding the economic recovery, particularly in the United States, where yesterday data showed a stagnation in the recovery of the labor market.

In less than two weeks, the $ 600 in additional unemployment support expires on a weekly basis, and Republicans have made it clear they do not plan to pass a plan worth more than $ 1 trillion, likely to reduce the magnitude of the unemployment benefit. weekly.

As for economic indicators, today the Monthly Survey of the Manufacturing Industry (EMIM) corresponding to May was released in Mexico. During the month, employment showed its second largest monthly decline, falling 1.79%, after falling 1.93% in April.

At an annual rate, employment decreased 5.8%. Inland, 18 of 21 industries observed monthly falls in personnel, the most affected being the manufacture of textile products (-5.74%) and furniture manufacturing (-3.82%), both non-essential industries.

In contrast, the hours worked in the sector increased 5.66% monthly, after registering a historical drop of 28.58%, driven by the reopening of some plants at the end of the month.

It should be noted that the EMIM shows that the plant capacity used stood at 45.4%, representing a drop of 44.36% annually, evidence that as of May there was still no reactivation of the industry and that the fall in employed personnel is significantly less than the fall in manufacturing operations.

That is, if the underutilization of the plant continues in the coming months, it is likely that employment in the manufacturing sector will be more affected. 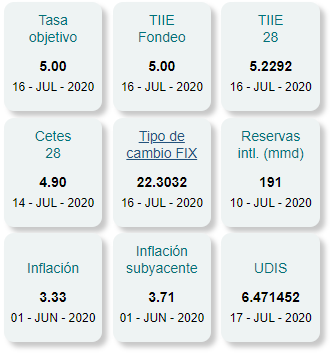 Regarding the use of the plant, he highlights that sanitary protocols are also forcing plants to operate at lower capacity levels than what was observed prior to the pandemic. As a reference, the plant capacity used was 81.4% in February.

Today, the exchange rate is expected to trade between 22.25 and 22.55 pesos per dollar.

To hedge against a depreciation of the peso beyond 23 pesos per dollar, a call option, with an exercise date within 1 month has a premium of 1.65% and represents the right but not the obligation to buy dollars in the level mentioned above.