The peso begins the session with little change, showing an appreciation of 0.37%, trading around 22.26 pesos per dollar. In the global financial market, the perception of risk has increased due to the decision of the United States government to order the closure of the Chinese consulate in Houston, giving a three-day notice to abandon it.

According to the State Department, the decision to close the consulate was to protect American intellectual property and private information.

In response, China’s Foreign Ministry has said the country plans to react with “firm measures.”

The escalation of tensions between the two countries makes it unlikely that progress will be made in the coming months to end the current trade war.

Likewise, tensions are reaching a level that could spread to the next US administration, even if Democrats win the presidency.

Market optimism also faded on news that Republican and Democratic lawmakers in the United States, as well as the White House, are still far from reaching an initial agreement on the fiscal stimulus package.

According to Democratic leaders, negotiations cannot begin until the White House and Republicans in Congress reach an initial agreement.

It should be noted that there is little time for the approval of these fiscal measures, as part of the unemployment support expires on July 31. Also, in August Congress goes into recess, so there is a risk that the negotiations will extend to September if an approval is not achieved the following week.

Loss is seen in the capital markets, particularly in Asia where the Nikkei 225 in Japan lost 0.58%, while the Hang Seng in Hong Kong fell 2.25%. In Europe the main indices fall on average about 0.70%, while in the United States the futures market shows moderate falls for the main indices close to 0.20%.

According to the EMEC, in May, retail sales registered a slight advance of 0.77% monthly, after the historical fall of 22.54% in April. Therefore, in annual terms it presents a decrease of 23.39%, adding 4 consecutive months of setbacks.

The weakness in sales continued to be concentrated in non-essential goods, with monthly drops in stationery items (-23.55%), clothing (-17.41%) and beverages, ice and tobacco (-16.50 percent).

In contrast, the 35.18% increase in department store sales stands out, an advance that could be influenced by the commemoration of Mother’s Day in the reference month.

On the other hand, wholesale sales contracted at a monthly rate of 5.13% and at an annual rate of 23.84%, the largest drop on record and adding 16 consecutive months of contractions, evidence of the fragility of the economy prior to the pandemic . 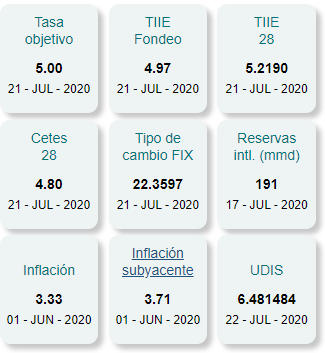 However, given that the official containment measures were lifted on June 1, the data is likely to show a recovery in most subsectors of the service sector from that month.

Likewise, the June Telephone Survey on Consumer Confidence (ETCO) was released, which presented an advance of 0.9 points, to be located at a level of 32.0 points, given a slight optimism due to less mobility restrictions.

To cover a depreciation of the peso beyond 23 pesos per dollar, a call option, with an exercise date within 1 month, has a premium of 1.39% and represents the right but not the obligation to buy dollars in the level mentioned above.