The peso begins the session with a depreciation of 0.21% or 4.7 cents, trading around 22.12 pesos per dollar, before a strengthening of the US dollar after the early PMI indicators for the month of August were published in Europe.

Likewise, the manufacturing sector index decreased slightly from 51.8 to 51.7 points in August.

The stagnation of the economic recovery is a consequence of the increase in Covid-19 cases that has been observed in recent weeks and that has led governments to impose restrictions to prevent the transmission of infections, mainly affecting the service sector.

The slowdown in economic activity in Europe during August has also caused a weakening of the capital market, where most of the main indices in the region show a decline close to 0.40%, while in the United States the futures market points to a lower opening, with losses close to 0.50 percent.

Due to the strengthening of the dollar, the price of gold again shows a decline of 1.57%, trading at 1,916.71 dollars per ounce.

Not all the news has been negative. Pharmaceutical companies Pfizer and BioNTech reported that the vaccine they are developing against Covid-19 is in the process of being submitted for a regulatory review in October.

If so, the vaccine could be approved in November. However, the positive market reaction to the news was overshadowed by the release of the PMI indicators.

It should be added that, in the United States, Joe Biden formally accepted the Democratic presidential nomination and asked Americans to elect him, calling his opponent a national shame that has left Americans vulnerable to the crisis of the pandemic.

In the following weeks, the markets’ attention will focus more attention on the electoral process in the United States and the probabilities of a change of government.

Regarding economic indicators, this morning the Monthly Survey of Services for June was published in Mexico. In the interior, the income from the supply of goods and services remained unchanged with respect to the previous month, with which they present an annual fall of 29.3 percent.

The recovery of the service sector is being slower than expected, since, as the Sana Distancia day ended on June 1, most of the companies reopened and a positive monthly change was anticipated.

However, in the interior there is a recovery in income from health services (20.5% per month); leisure, cultural, sports and recreational services (13.8%); temporary accommodation and food and beverage preparation services (7.5%); educational services (7.0%); transportation, mail and storage (5.3%); and professional, scientific, and technical services (1.5 percent).

At an annual rate, the most affected sectors continue to be leisure, cultural, sports and recreational services (-86.5%); temporary accommodation and food and beverage preparation services (-58.9%); and transportation, mail and storage (-39.9 percent).

Although the economy reopened in June, the economic impact of the pandemic is expected to last even longer, especially due to the longer-term effect that will cause job losses and business failures.

For June, the Monthly Survey of Commercial Companies was also published. In the month, the real income of the commercial retail companies registered a monthly increase of 7.81 percent.

On the other hand, in annual terms they registered a contraction of 17.15%, evidence that the recovery is far from complete. 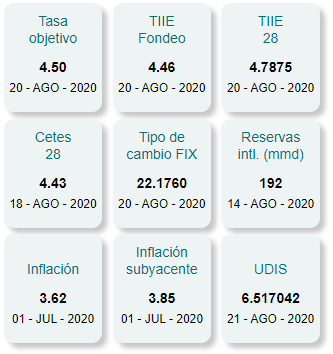 In the interior, the sectors that registered the greatest monthly increase in their sales were: footwear (113.62%), beverage, ice and tobacco products (85.08%) and textile products, clothing, costume jewelery and clothing accessories (61.02 percent).

The rebound effect of clothing and footwear stands out, after being one of the sectors most affected in the previous months, being driven by the reopening of department stores.

In contrast, exclusive internet sales fell at a monthly rate of 7.34%, after being the only sector benefiting from the confinement. For their part, wholesale sales registered an increase of 11.1% per month and a contraction of 15.6% per year.

To hedge against a depreciation of the peso beyond 22.50 pesos per dollar, a purchase option (call), with an exercise date within 1 month has a premium of 1.92% and represents the right but not the obligation to buy dollars in the aforementioned level.