The peso starts the session with little change compared to yesterday’s closing, showing a depreciation of 0.06%, trading around 22.18 pesos per dollar.

The exchange rate is stable again, probably looking for direction.

The main crosses against the dollar show a mixed performance, the most appreciated currencies being the British pound with an advance of 0.31% and the Japanese yen with 0.27%, while the most depreciated are the Turkish lira with 0.58% and the Russian ruble with 0.46 percent.

In the capital market, losses have been observed since the European session, with most of the indices losing an average of 1.6%, while in the futures market there is a mixed performance of the main indices in the United States, with the Dow Jones losing 0.20% and the Nasdaq advancing 0.24 percent.

In the commodities market, performance is also mixed, since the WTI advances 0.07%, trading at 41.27 dollars per barrel, while the price of gold shows a lateral behavior, losing 0.28% and trading at 1,948.24 dollars per ounce.

The perception of risk in the capital market may be related to the publication of the employment statistics of the Eurozone, where a fall in the second quarter of 2.8% quarterly and 2.9% annually was observed, leading to the destruction of employment to 4.9 million during the first semester. For comparison purposes, since the recession of high fiscal deficits between 2012 and 2013, about 12 million jobs had been created in the Eurozone.

The number of job losses is likely to continue to rise, as the pandemic is not over and the service sector continues to be affected.

According to the media, the coronavirus is recovering strength in Europe, particularly in Germany where more than 1,000 new cases have been registered for four consecutive days, something not seen for more than three months.

Relevant economic indicators were also published in China, where industrial production in July showed an annual growth of 4.8%, slightly below market expectations.

On the other hand, retail sales contracted 1.1% annually in the same month, in contrast to an expected growth of 0.1%. This also contributes to negative market sentiment. 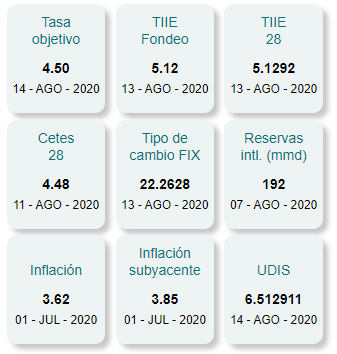 During the session, the sentiment of the markets will probably depend on indicators and news coming from the United States, since the negotiations between Republicans and Democrats around the new stimulus package have not shown a significant advance.

It should be noted that yesterday the Republican leader in the Senate, Mitch McConnel, indicated that although the legislators are in recess until September 8, it is possible to call the members of the House in emergency in case an agreement is reached bipartisan.

On the other hand, in July, retail sales grew at a monthly rate of 1.2%, below market expectations of 2.1%, being consistent with the slowdown in consumption in July, after the increases registered in May and June.

In its annual variation, retail sales increased 2.7%. In the interior, the greatest monthly advances were observed in electronics stores (22.9%), gasoline stations (6.2%) and restaurants (5 percent).

The industrial production of the United States will be published at 8:15 am, where a monthly increase of 3.0 percent is expected.

During the session, the exchange rate is expected to trade between 22.10 and 22.30 pesos per dollar. The euro starts the session with an appreciation of 0.08%, trading at 1.1823 dollars per euro, while the pound appreciates 0.45% and trading at 1.3126 dollars per pound.

To hedge against a depreciation of the peso beyond 22.50 pesos per dollar, a purchase option (call), with an exercise date within 1 month has a premium of 1.86% and represents the right but not the obligation to buy dollars in the aforementioned level.