On the day, the peso is the seventh most appreciated currency, below the South African rand, the Brazilian real, the Chilean peso, the Australian dollar, the Chinese yuan and the Israeli shekel.

In the month, the peso is the second most appreciated currency, only behind the Brazilian real, while in the year it continues to fall, being the seventh most depreciated.

The peso appreciation again occurs in the face of a general weakening of the dollar, with the dollar weighted index losing 0.28% today and accumulating a 0.81% decline in the last three sessions.

In the session, a clear increase in risk appetite is observed in global financial markets, as gains are observed for most currencies and gains in European capital markets, where the main indices advance on average close to 0.70 percent.

Capital markets in the United States are also likely to post gains based on the futures market.

The peso and the world

The advance of the markets is mainly due to two news:

In the session, the market could still react to the publication of economic indicators in the United States, since the industrial production for August is published at 8:15 am, where a monthly growth of 1% is anticipated. At the same time, data on manufacturing production in that country are published. 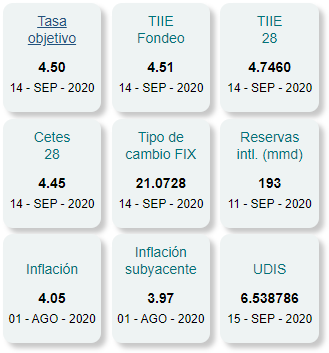 In the commodities market, energy commodities show gains as a result of the weak dollar. The price of WTI increases 1.34%, while Brent rises 1.03% to 37.77 and 40.05 dollars per barrel respectively.

For its part, the price of gasoline rises 0.40%. Metals also rose, mainly precious, but not due to greater demand as a refuge but because of the weakness of the dollar. Gold advanced 0.69%, while silver shows an advance of 1.80 percent.

To hedge against a depreciation of the peso beyond 22 pesos per dollar, a purchase option (call), with an exercise date within 1 month has a premium of 0.95% and represents the right but not the obligation to buy dollars in the aforementioned level.