The peso started the session with few changes, showing a depreciation of 0.01%, trading around 21.76 pesos per dollar, after the overnight exchange rate touched a minimum of 21.6786 pesos, a level close to the minimum for the month.

For the second consecutive session, the exchange rate remains stable while most currencies lose ground against the dollar, whose weighted index shows an advance of 0.36 percent.

This is still the result of an upward correction in the dollar, but is also due to the expectation that the United States economy could recover faster with the availability of a vaccine against Covid19 in the coming months.

The Center for Disease Control and Prevention (CDC) in the United States, asked state governments to eliminate barriers to permits for the distribution of vaccines, setting a deadline of November 1, 2020, the date on which they plan to begin distribute the first vaccines.

On the other hand, the Food and Drug Administration (FDA) reported that it will have a meeting on October 22 to discuss the development, authorization and licensing of vaccines against the coronavirus.

The experimental vaccines against the coronavirus continue to show progress, today at dawn the European pharmaceutical companies, Sanofi and GlaxoSmithKline Plc, reported the start of their clinical trials in humans, if successful they would be beginning their final tests in December.

According to the World Health Organization (WHO), 175 vaccines against Covid-19 are being developed, of which 33 are already being tested in humans.

The peso and capital

In the foreign exchange market, the most depreciated currencies are the Norwegian krone with 0.88%, the New Zealand dollar with 0.78%, the Australian dollar with 0.75% and the British pound that depreciates 0.75%. It should be noted that other financial markets show mixed performances.

In capitals, the European session shows progress for the second consecutive session, with the main indices gaining between 0.6 and 1.6%. This is mainly due to the fact that, in France, President Emmanuel Macron announced a new stimulus package equivalent to 118 billion dollars, with the intention of accelerating the economic recovery of his country.

For its part, the general strengthening of the US dollar continues to push down the price of commodities, including oil, leading the WTI to trade at $ 40.67 per barrel, which is equivalent to a contraction in its price of 2.02 percent.

Another factor pushing oil prices down is rising concerns about global fuel demand, especially as the summer season is ending and the refinery maintenance season is beginning.

In the United States, the futures market points to an opening with losses in the capital market, mainly in stocks in the technology sector.

This may be due to the fact that, after the strong gains in the sector in previous months, the market is looking at the possibility of taking profits and rebalancing investment portfolios.

The development of an effective vaccine against the coronavirus could mean a difficulty for the shares of companies in the technology sector to continue their upward trend towards the end of the year.

In terms of economic indicators, in the United States, initial claims for unemployment benefits for the week ended August 29 were 881 thousand, down by 130 thousand compared to last week.

This is the second time that initial applications have fallen below a million since the pandemic began in March.

Likewise, the continuous applications for unemployment support, of those people who are already receiving support or continue to wait, decreased from 14,492 million to 13,254 million.

It should be remembered that, tomorrow at 7:30 am the non-agricultural payroll for the month of August is published, the market expects the report to show the creation of 1.3 million jobs.

On the other hand, the trade balance of the United States showed a deficit of 63.6 billion dollars (million dollars) in July, increasing 18.9% or 10.1 billion compared to the previous month.

With the data accumulated from January to July 2020, Mexico is once again the main trading partner of the United States, representing 14% of its international trade, followed by Canada with 13.9% and China with 13.5 percent.

For its part, in Mexico, the new edition of the National Survey of Occupation and Employment (ENOE) corresponding to the month of July was published, which was made up of 72% of face-to-face interviews and 28% of telephone interviews, under the same methodological design of the traditional ENOE.

The survey revealed a new increase in the Economically Active Population (EAP) of 1.48 million, of which 1.45 million people were classified as employed and 0.03 million as unemployed. 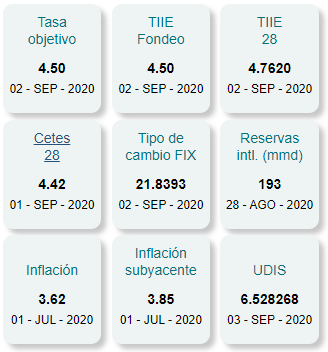 Of the 12 million people who left the PEA in April due to the suspension of activities to contain the virus, 7.2 million have returned by the seventh month of the year. The above generated a decrease in the unemployment rate from 5.5% in June to 5.4% in July. A more accelerated recovery of the informal labor market stands out, with the increase of 1.7 million people.

For its part, the underemployment rate decreased to 18.44%, after registering 20.1% the previous month, evidence of the gradual recovery of economic activity.

To hedge against a depreciation of the peso beyond 22.50 pesos per dollar, a purchase option (call), with an exercise date within 1 month has a premium of 1.17% and represents the right but not the obligation to buy dollars in the aforementioned level.