The peso begins the session with a depreciation of 0.65% or 14.2 cents, trading around 22.02 pesos per dollar, in a movement of correction to the gains of previous days.

This correction occurred after the exchange rate touched a minimum of 21.9002 pesos per dollar during the overnight, a level that was considered attractive to close positions in favor of the peso and take hedges.

The movement was not exclusive to the Mexican peso, as most currencies begin the session with a depreciation against the dollar. It should be noted that last night, the dollar-weighted index stood at a minimum of 1,174.23 points, its lowest level since September 26, 2018, which was seen as an opportunity for market participants to increase their position in US dollars.

The strengthening of the dollar is also due to a gradual increase in the perception of risk in global financial markets, as the process of approving the fiscal stimulus package in the United States is likely to continue.

Yesterday, the Democratic leader in the House of Representatives, Nancy Pelosi, called the Republican plan “pathetic.”

The Republican-proposed tax package, equivalent to a trillion dollars, includes a decrease from $ 600 to $ 200 a week in additional unemployment support until September, and then the support will be based on the salary held prior to the layoff.

The peso and the United States

Also included is a second round of direct checks of $ 1,200 for individuals who receive an annual income of less than $ 75,000.

Likewise, 105 billion dollars were assigned to educational institutions and a deferred payment on educational loans. As a separate package of bills, Congress has the option to pass certain sections first and leave others for after the August recess.

For its part, in Europe the resurgence of Covid-19 cases caused the United Kingdom to impose a two-week quarantine on people arriving from Spain, and also advised to cancel all non-essential trips to that country. Similarly, Germany recommended not to travel to the regions of Catalonia, Navarra and Aragon.

At the beginning of the session, the most depreciated currencies are the Russian ruble that lost 1.10%, the South African rand with 0.94%, the Turkish lira with 0.92% and the Polish zloty, with 0.63%. In contrast, the three currencies showing gains are the Taiwanese dollar, which is advancing 0.14%, the Swiss franc with 0.13%, and the Japanese yen, with 0.06 percent. 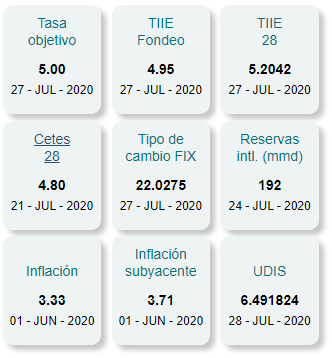 Gold starts the session with a decrease of 0.67%, being its first decrease since mid-July. The price of gold is likely to continue its upward trend during the next sessions, overcoming the barrier of $ 2,000, as the main determinant of the strength of gold is the expectation of a highly accommodative monetary policy in the United States for a period of time. dragged on.

To hedge against a depreciation of the peso beyond 22.50 pesos per dollar, a call option, with an exercise date within 1 month, has a premium of 1.80% and represents the right but not the obligation to buy dollars in the level mentioned above.