The peso closed the session with a depreciation of 2.09% or 46.8 cents, trading around 22.82 pesos per dollar, ranking as the most depreciated currency in the basket of major crosses and among the currencies of emerging economies, as a result of an increase in perception global risk.

The nervousness of the markets began in the European session after the European Commission adjusted downward the expectation of contraction of the Eurozone from -7.7% to -8.7% in 2020. On the other hand, the nervousness related to growth remained in coronavirus cases globally, particularly in the United States where infections continue.

There is also a greater perception of relative risk in Latin America, where the number of infected continues to rise, particularly in Mexico and Brazil. In fact, in Brazil, it was revealed that the president, Jahir Bolsonaro, has coronavirus.

The Brazilian real closed with a depreciation of 0.73%, trading at 5.39 reais per dollar, while, in the capital market, the Ibovespa closed with a 1.19 percent drop.

The peso and its trend

From a technical point of view, the market seems to have taken advantage of the downward movement of the exchange rate of previous days to 22.15 pesos per dollar to make advance purchases of dollars and hedges, which has caused an upward correction during the day. 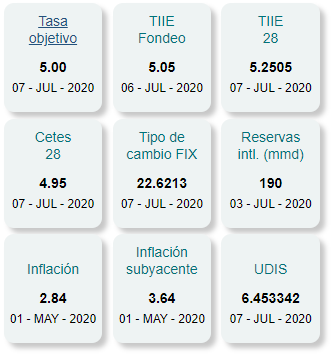 The exchange rate is again close to the resistance of 22.89 pesos, a 50-day moving average that could not be drilled forcefully in late June. Today’s move also confirms the rejection of a downward trend in the exchange rate in the first half of July.