The peso closed the session with a depreciation of 0.38% or 8.6 cents, trading around 22.71 pesos per dollar, after hitting a maximum of 22.9097 pesos per dollar, ranking as the second most depreciated currency in the exchange market behind the South African rand which lost 1.04%.

The peso depreciation occurs in a mixed session, where the US dollar closed with little change closing at 1,179.46 units, which is equivalent to a 0.22 percent weakening.

Like the foreign exchange market, the rest of the financial markets also showed mixed results, as the market is waiting for relevant events that have the capacity to cause volatility.

Also, by the end of the week, US lawmakers are expected to hold negotiations on the additional fiscal stimulus, prior to the August recess.

It should be noted that the greater liquidity of this new package can generate profits for some financial markets, which is particularly notable in the current scenario, where low interest rates reduce the opportunity cost of investing in financial markets and companies’ valuations in the models increase.

The peso and the gold

In the case of gold, monetary and fiscal policies that are designed to stimulate economic activity also generate upward pressure on its price, leading it today to hit a new all-time high of $ 2,009.61 per ounce.

Another factor that could be contributing to the depreciation of the peso is a technical movement, since in the sessions yesterday and today the resistance was pierced at 22.25 pesos and the 50-day moving average of 22.37 pesos. 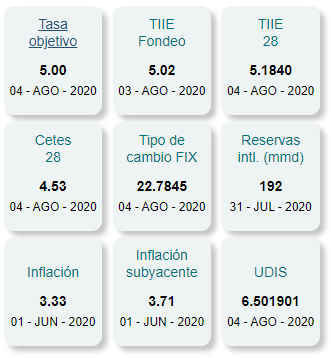