In the first session of the week, the Mexican peso closed with a depreciation of 0.36% or 8.1 cents, trading at around 22.46 pesos per dollar.

In the foreign exchange market, a mixed session was observed, with the dollar-weighted index oscillating between profit and loss.

The Mexican peso ranked as the third worst performing currency among the main crosses of the dollar, after the Brazilian real, which depreciated 0.56%, and the euro, which lost 0.39 percent.

In the rest of the financial markets, a moderate risk appetite was observed, due in part to the executive orders that President Donald Trump signed over the weekend, which allow him to use the existing $ 2 trillion fiscal stimulus to expanding unemployment benefits, allowing tax deferrals and student loan delinquencies, and providing financial assistance to renters and homeowners struggling to pay their monthly rents or mortgages.

Thus, in the capital market, moderate gains of less than half a percentage point were observed in Europe and mixed results in the United States, with the Dow Jones advancing 1.30% and the NASDAQ falling 0.39%. In the commodities market, gold fell, while industrial metals and oil closed with gains.

The peso and tourism

Regarding economic indicators, in Mexico the International Travelers Survey (EVI) was published, corresponding to June, which showed a decrease in the number of visitors of 68.9% compared to the same month of the previous year.

For its part, foreign exchange income from total visitor spending was 231.5 million dollars, which is equivalent to an annual contraction of 88.3 percent.

It is important to mention that a quick recovery is not expected for the number of international visits.

In fact, it is likely that it will take several years to recover to the pre-crisis level, due to the international health and economic crisis, as well as internal factors such as the lack of public resources for promotion, after the elimination of the Mexican Tourism Promotion Council. (CTPM) last year.

The current negative figures for the flow of tourists and the not very encouraging outlook for the tourism sector in general have a great impact on states that depend on this activity, where it stands out: Quintana Roo, Baja California Sur and Nayarit, where accommodation services represent the 23.10%, 13.70% and 12.82% of its GDP.

This week will not be intensive in economic indicators, except for Friday, when data on industrial production and retail sales in the United States and China, both corresponding to July, will be published.

Thus, financial markets are expected to pay attention to the evolution of the coronavirus pandemic, which to date has infected more than 20 million people in the world and more than 5.2 million in the United States.

Another factor that could generate nervousness in the financial markets is the possibility that the political instability in Lebanon will intensify, because today the prime minister of that country announced his resignation, along with that of the cabinet, so that Parliament must elect a a new prime minister.

Prime Minister Hassan Diab had been elected in January after months of stalemate in parliament, so lawmakers are again expected to show difficulty reaching an agreement. 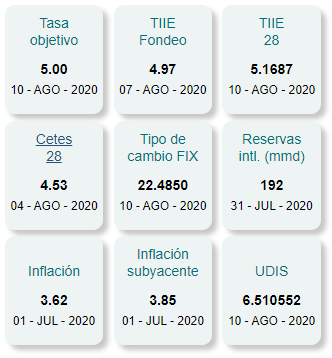 In the case of Mexico, the attention of the markets will be on the monetary policy decision of the Bank of Mexico, which will be released on Thursday afternoon and is expected to include a 50 basis point cut in the interest rate, placing it at 4.50 percent.

Likewise, tomorrow, Tuesday, the industrial production data for June will be released, while ANTAD will publish its monthly statistics of sales in the retail stores of its members, corresponding to July.