The peso begins the session with little change, showing a depreciation of 0.12% or 2.7 cents and trading around 22.35 pesos per dollar, given a weakening of most currencies against the US dollar.

It is important to mention that the strengthening of the dollar is moderate, since the weighted index shows an advance of only 0.10% compared to yesterday’s close.

The strengthening of the dollar occurred overnight, after the publication of mixed economic indicators for China.

During the second quarter, China’s GDP grew at an annual rate of 3.2%, beating expectations, after falling 6.8% during the first quarter.

When comparing the first semester with the same period of 2019, the GDP shows a fall of 1.6%. Likewise, retail sales in June showed an annual contraction of 1.8%, contrary to a recovery of 0.5% expected by the market.

On the other hand, the initial applications for unemployment support were published in the United States for the week ended July 11, which stood at 1.30 million, below the 1.31 million reported in the previous week, although above market expectations of 1.25 million.

With this information, they have accumulated 17 consecutive weeks of over a million requests. For its part, the continuous applications, which show the people who are currently receiving unemployment support stood at 17,338 million.

The peso and other indicators

For its part, June retail sales showed a monthly growth of 7.5%, above the 5.0% expected by the market, after the rebound in sales during May, when they rose 18.2 percent.

On the other hand, in the monetary policy announcement of the European Central Bank, interest rates and the bond purchase program announced after the pandemic for 1.35 trillion euros were unchanged. There is no significant reaction from the euro, which started the session unchanged from yesterday’s close, trading near $ 1.1410 per euro.

In the raw materials market, the price of oil loses ground due to the decision of the Joint Ministerial Monitoring Committee of OPEC and its allies (OPEC +), to reduce cuts in oil production from August.

The coalition will lower its restrictions to 7.7 million barrels a day, from 9.6 million cut in June and July. 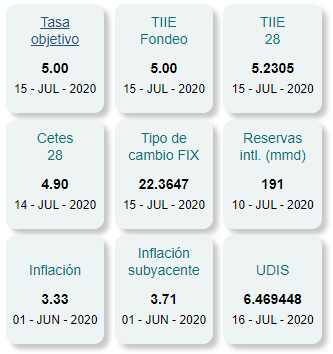 It should be noted that members who did not fulfill their commitment to reduce production will compensate with reductions in August and September. Given this, the WTI shows a reduction of 1%, trading around $ 40.79 per barrel.

To hedge against a depreciation of the peso beyond 23 pesos per dollar, a call option, with an exercise date within 1 month, has a 1.62% premium and represents the right but not the obligation to buy dollars in the level mentioned above.