The depreciation of the peso was accompanied by a strengthening of the US dollar against most of the major crosses, generated by an episode of uncertainty in global financial markets that activated the properties of the dollar as a safe-haven currency.

This episode of uncertainty was mainly due to some economic indicators that were published, which revealed the strong impact of the pandemic on the main world economies.

In Germany, the preliminary estimate for second-quarter GDP showed that it contracted at a quarterly rate of 10.1%, above the contraction of 9.0% expected by the market.

In the United States, GDP contracted at an annualized quarterly rate of 32.9% in the second quarter, below the expected drop by the market of 34.5% annualized.

Although the drop in GDP was less than market expectations, stress continues to be seen on the US labor market, which contributed to the nervousness in the financial markets.

The peso and the economy

For its part, in Mexico the preliminary estimate of GDP for the second quarter was also published, which showed that the economy contracted at a quarterly rate of 17.26% (53.14% annualized) and at an annual rate of 18.92%, the biggest falls since which is recorded in the series that began in 1993.

Because the data does not stray far from the forecast, Banco Base maintains its expectation of a contraction of 9.5% in 2020, which would be the biggest drop in GDP since the Great Depression in 1932, of 14.92 percent.

Negative reactions to the published data were also observed in the rest of the markets, with decreases in the prices of industrial metals and oil in the commodities market, global losses in the stock market, and a strengthening of the dollar against currencies of emerging economies and/or producers of raw materials in the exchange market.

In fact, the Mexican peso was the fourth worst performing currency in the session, after the South African rand, which lost 1.38%, the Canadian dollar, which depreciated 0.80%, and the Norwegian krone, which fell 0.55 percent.

On the other hand, the currencies with the best performance were the pound, with an advance of 0.72%, the euro, with an appreciation of 0.44%, the Danish krone, which appreciated 0.42%, and the Swiss franc, with an increase of 0.36 percent.

In the session, the peso-dollar reached a minimum of 21.9524 and a maximum of 22.2386 pesos per dollar in the interbank prices for sale. 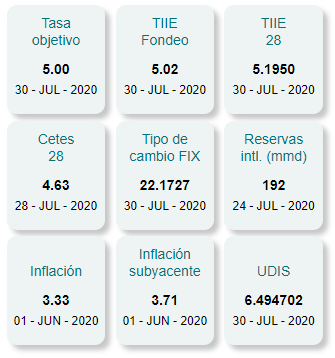