The depreciation of the peso was due to a gradual recovery of the US dollar during the session, to close with an advance of 0.10% according to the weighted index.

The volatility of the exchange rate and the lack of a trend indicate that the market is waiting for key events during the week, mainly related to monetary policy in the United States and Mexico.

This Wednesday at noon, Banco de México will publish the quarterly inflation report, where it is probable that the forecasts for economic growth will be adjusted downwards and those for inflation upwards.

For its part, on Thursday at 9:00 am, the monetary policy minutes of the latest Banco de México decision will be released.

Both posts could offer key insights into the future of the interest rate.

If it is interpreted that the cycle of cuts to the interest rate is about to end in Mexico, the exchange rate could strengthen in the coming sessions.

In the scenario of an appreciation, a key support for the exchange rate is the level of 21.85 pesos per dollar, the July minimum.

In the foreign exchange market, the most depreciated currencies during the session were the Turkish lira, which lost 0.86%, the Colombian peso with 0.47% and the Canadian dollar with 0.43 percent.

The peso and Trump

It is important to note that a session of optimism was observed globally in the capital market, which allowed the S&P 500 in the United States to reach a new all-time high of 3,431.35 points.

The advance of the capital markets was driven by the expectation that the Donald Trump administration will accelerate the approval process of a vaccine against Covid19 or some drug that reduces the mortality rate. 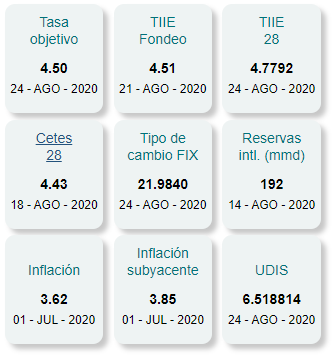