The peso begins the session with a depreciation of 0.28% or 6.1 cents, trading around 21.84 pesos per dollar, before an upward correction of the US dollar against its main crosses, which registers an advance of 0.25% according to the weighted index.

In global financial markets, there is a greater appetite for risk, so there is no clear pattern between the currencies that lose against the dollar, with declines in both emerging and advanced currencies.

The dollar correction is due to the fact that the dollar weighted index accumulated a fall of 14.06% from the maximum in the year reached on March 23 to the minimum of the session yesterday.

Another factor contributing to the dollar’s advance is the expectation that a new stimulus package will be approved in the United States.

Yesterday, Treasury Secretary Steven Mnuchin warned of the need for a new stimulus package for the US economy to recover from the crisis caused by the coronavirus.

Given this, Republican senators are working on a tighter package, equivalent to 500 billion, with the goal of voting next week, when Congress returns from its recess.

It is important to note that the bets towards the elections for president on November 3 show that Trump has serious chances again, with 50% vs. 50.2 from Joe Biden.

Global capital markets register gains, mainly in Europe where the main indices advance on average 2%, due to positive news about the vaccines that have been developed against Covid19.

Yesterday Dr. Anthony Fauci pointed out that the data on the tests are so good that the availability of a vaccine could be anticipated.

For now the tests are scheduled to conclude at the end of the year, but Fauci said this could be brought forward several weeks if the results are positive.

In the futures market, it is observed that the main United States indices could reach new historical highs after the opening, showing advances between 0.55 and 0.95 percent.

Regarding economic indicators, the Automatic Data Processing (ADP) survey on monthly employment was published in the United States. According to ADP’s estimate, 428 thousand job positions were created in August, below market expectations of 950 thousand.

In Mexico, INEGI announced the progress of sales to the public in the domestic market of the 21 affiliated companies of the Mexican Association of the Automotive Industry (AMIA).

Car sales in August maintained moderate advances for the fourth consecutive month, reporting 77,092 from 72,897 units in July, equivalent to an increase of 5.75 percent.

In annual terms, car sales have fallen 28.65%. The rest of the indicators (production and export) of the Automotive Administrative Registry will be released on Friday, September 4.

For its part, the System of Composite Indicators: Composite and Leading (SICCA) for June, showed the beginning of the recovery.

The Coincident Indicator was located at a level of 85.6 points, which represented a monthly advance of 13.08%, after falling for four consecutive months. 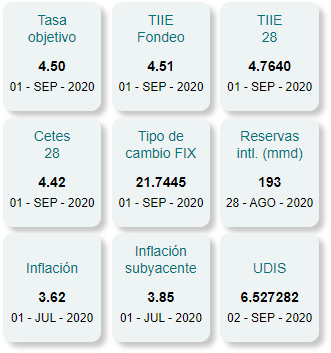 For its part, the Coincident Indicator of the Cyclical Indicators System (SIC) stood at 93.31 points, showing the first monthly advance of 3.25 points, after 24 months of setbacks. This indicator accumulates 12 months below its long-term trend of 100 points.

To hedge against a depreciation of the peso beyond 22.50 pesos per dollar, a purchase option (call), with an exercise date within 1 month has a premium of 1.20% and represents the right but not the obligation to buy dollars in the aforementioned level.