The peso starts the session with a depreciation of 0.13% or 2.7 cents, trading around 21.58 pesos per dollar, once again a general strengthening of the US dollar is observed.

The most depreciated currency in the basket of main crosses is the pound sterling, after the Prime Minister of the United Kingdom, Boris Johnson, threatened to leave the bloc without reaching a trade agreement with the European Union, setting a deadline of 15 October.

The pound starts the session with a depreciation of 0.87%, trading at 1.3164 dollars per pound.

Other currencies that lose against the dollar are the South African rand with 0.67%, the New Zealand dollar with 0.31% and the Swedish krona with 0.27 percent.

In the capital market, gains are observed in the European session above 1.5% on average, driven by actions in the industrial sector, which is associated with expectations of economic recovery.

However, there are still risks going forward related to the coronavirus.

The cases of Covid19 in the United Kingdom, reached levels not seen since May 22, reporting 2 thousand 988 infections in the last 24 hours.

Similarly, in France there was an increase in cases due to the return to classes and the reopening of schools, registering 7,701 new cases.

For its part, the WTI starts the session trading at $ 39.16 per barrel, which is equivalent to a 1.53% contraction. The decrease in the price of oil is related to two factors: 1) Saudi Arabia cut its prices with which it sends light crude to Asia for the month of October, indicating that demand remains weak despite the economic reopening and 2) uncertainty around the demand for hydrocarbon in China.

Regarding economic indicators, today the Gross Fixed Investment (IFB) figures for the month of June were published in Mexico, registering a recovery of 20.1% with respect to the immediately previous month and an annual contraction of 25.2%, spinning 17 months to lowers it.

On the other hand, investment in construction had a recovery of lesser magnitude, growing 13.7% in the month, still showing an annual contraction of 25.3 percent.

In annual comparison, both are still very affected, with contractions of 23.9% in residential and 29.0% in non-residential.

Although investment in machinery and equipment recovered with the reopening of the economy, investment in the construction sector still remains low and its deterioration began last year, due to the lack of confidence of the business sector in the economy.

For its part, private consumption in June, the first month of the new normal, showed a 5.54% monthly recovery. In annual terms, it was 19.62% below what was observed in June 2019. 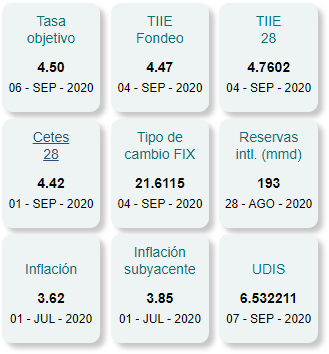 Inside, all components showed progress, highlighting the rebound in the consumption of imported goods of 10.55% per month, after being one of the most affected by the confinement.

For its part, the consumption of national goods presented a monthly growth of 4.55%, as a result of an advance of 7.90% in the consumption of goods and the weak increase in consumption in services with 1.52%, due to the extension of sanitary restrictions that forced to keep some businesses belonging to the service sector closed.

In the United States, the bond market remains without operations, while in Mexico the yield on 10-year M bonds increases 0.7 basis points, to 6.03 percent.

To hedge against a depreciation of the peso beyond 22 pesos per dollar, a purchase option (call), with an exercise date within 1 month has a premium of 1.50% and represents the right but not the obligation to buy dollars in the aforementioned level.