At the beginning of the last session of the month, there is caution among financial market participants, after strong gains were observed during November, mainly the result of positive news about vaccines against Covid-19.

Since it is the end of the month, the exchange rate is likely to slow its appreciation due to an increase in demand for dollars and to adjustments in investment portfolios in other financial markets.

In November, the Mexican peso accumulated an appreciation of 5.22% or 1 peso and 11 cents, being the ninth most appreciated currency in the wide basket of main crosses and emerging to be the largest monthly advance since May, when it appreciated 8.27 percent.

The most appreciated currency is the Norwegian krone with an advance of 7.57%, followed by the Brazilian real with 7.38% and the Turkish lira with 6.98 percent.

This is due in part to the greater appetite for risk in global financial markets, but also to the strengthening of the price of oil, since during the month the price of WTI accumulates an advance of 25.68%, shaping up to be the highest monthly gain since May of this year and before this date, since May 2009.

This morning, the price of WTI shows a 0.81% decline and is trading around 45.2 dollars per barrel, as OPEC and its allies (OPEC +) will begin a two-day meeting to determine if they will extend the cuts to oil production beyond from January.

Yesterday, Sunday, most of the members held talks supporting the decision to maintain the current cuts, as global markets remain fragile.

After the two-day meeting, it is likely that the continuity of the production cuts will be confirmed and that the price of WTI will remain stable between 44 and 47 dollars per barrel.

In the capital market, the main global indices show a stable performance in the last session of the month.

The main indices in Europe advance an average of 0.04%, while in the futures market the main indices of the United States point to an opening with mixed results. Despite this, in the month the indices accumulate important gains.

Before the opening, in the United States, the Dow Jones accumulates a monthly advance of 12.86%, shaping up to be the largest monthly increase since January 1987, while the S&P 500 has gained 11.27%, the highest since April of this year, when the index recovered 12.68% after falling 12.51% in March.

Regarding relevant news, the Moderna pharmaceutical company reported that today it will request authorization for the emergency use of its vaccine against Covid19, in the United States and in Europe.

Moderna’s experimental vaccine showed 94.1% effectiveness in preventing cases in its final clinical trial of around 30,000 people.

Moderna is expected to meet with the US Food and Drug Administration (FDA) on December 17 to review the evidence and vote for authorization.

Financial markets have not reacted to the news, a sign that most of the optimism associated with news about the vaccine has already been discounted for the month.

For their part, in China, the indicators of manufacturing and non-manufacturing activity reached levels not seen since 2017 and 2012 respectively, showing a strong recovery almost a year after the first confinement by Covid-19.

The manufacturing PMI rose to 52.1 points in November from the previous reading of 51.4, registering a maximum not seen since September 2017. For its part, the non-manufacturing PMI stood at 56.4 points, its highest level since June of 2017. 2012.

It is important to mention that there are additional risks to the upside for the exchange rate related to the initiative in the Senate to modify the Bank of Mexico Law on foreign exchange acquisition.

The initiative implies risks for the Mexican financial system in regulatory matters related to the prevention of money laundering, but it would also send a negative signal to the market, as it could be interpreted as a vulnerability of the Central Bank’s autonomy. 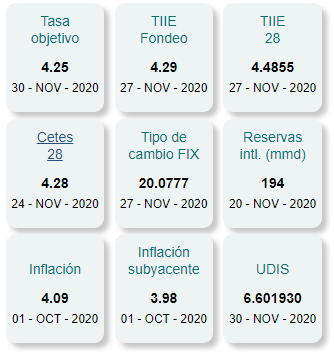 To hedge against a depreciation of the peso beyond 20.50 pesos per dollar, a purchase option (call), with an exercise date within 1 month has a premium of 1.49% and represents the right but not the obligation to buy dollars in the aforementioned level.