The historic quarter was marked by the severe impact of the coronavirus on western economies during April, forcing most countries to implement containment measures to mitigate the number of deaths.

Likewise, most of the countries initiated expansive economic policy measures, with the aim of promoting a rapid economic recovery. In the year, the peso accumulates a depreciation of 21.52% or 4 pesos and 7 cents.

In the first half of the year, the exchange rate reached a historical maximum of 25.7849 pesos per dollar and a minimum of 18.5237 pesos on February 17. 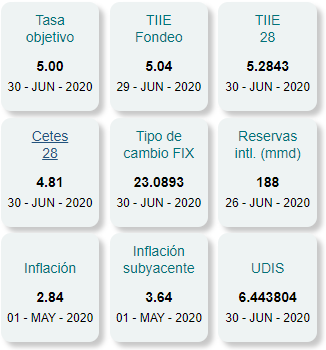 In Mexico, the refusal to counter-cyclical fiscal policy measures was surprising, since on April 5 López Obrador announced a reactivation plan based on a reorientation of public spending and loans of 25 thousand pesos to micro, small and medium-sized companies that had not trimmed staff.

This despite the fact that the health emergency was announced since March 31, leading to a temporary closure of the industry. After the refusal, the exchange rate reached the maximum historical level of 25.7849 pesos per dollar. This and other events accentuated the perception of risk in Mexico:

On April 22, an initiative was presented to modify the Retirement Savings Systems Law. Although the Morena caucus initially indicated that the initiative was not viable, nervousness reappeared during June after López Obrador spoke about the importance of reforming the retirement savings system.

On April 24, the government published a decree on government austerity measures, highlighting a 25% cut to the salary of senior officials, the suspension of Christmas bonuses and the cancellation of 10 undersecretaries.

On April 29, the National Energy Control Center (CENACE) presented an agreement to prevent the entry into operations of new renewable energy plants in Mexico for an indefinite period, which discourages future investment in the sector.

The policy was published in the Official Gazette of the Federation on May 15, leading the private sector to file 151 amparos (on June 29, the Supreme Court of Justice of the Nation indefinitely suspended the agreement in the face of a controversy imposed by the Cofece).

On June 10, the Morena bench coordinator in the Senate presented an initiative for the merger of the Federal Telecommunications Institute (IFT), the Federal Commission on Economic Competition (Cofece), and the Energy Regulatory Commission (CRE), in a new body: National Institute of Markets and Competition for Well-being (INMECOB).

Although the initiative has not advanced, it threatens to weaken the regulatory framework for private sector competition and its interaction with the public sector.

On June 24, it was announced that the company Iberdrola canceled the investment of 1.2 billion dollars for the construction of a power plant in Veracruz, after the CFE canceled the use of the Texas-Tuxpan gas pipeline for its operation. This event is in addition to the cancellation of the Constellation Brands brewery in Mexicali, after a citizen consultation carried out in late March.

Autonomously to the federal government, Banco de México cut the interest rate from 6.5% to 5% in the quarter, making three separate adjustments of 50 basis points each (on April 21 with an out-of-calendar cut, on May and June 26).

Likewise, measures were announced to provide liquidity and face the coronavirus crisis, measures that together would support the financial system for 750 billion pesos. The Foreign Exchange Commission also carried out financing operations in dollars with resources from a swap mechanism established on March 19 between Banco de México and the Federal Reserve.

There were other relevant events that deteriorate the economic outlook for Mexico. On the one hand, two agencies cut Mexico’s credit rating. On April 15, Fitch Ratings lowered the rating of Mexican debt to BBB-, from BBB, with a stable outlook. Two days later, Moody’s cut Mexico’s rating to Baa1 from A3, with a negative outlook.

From an economic point of view, the impact of the coronavirus on Mexico has been severe since March.

On the other hand, according to the ETOE, in April about 12 million people left the economically active population (PEA), which is a historical fact. In the ETOE in May, the PEA increased only by 67,946, while underemployment rose by 2 million, a sign that the conditions of workers are now more precarious.

The Global Economic Activity Indicator (IGAE), showed that in April the economy fell 19.67% annually and 17.31% monthly, something not seen in the indicator’s history. In January 1995, the indicator contracted 6.01%. It should be added that the IGAE was at its lowest level in April since February 2010, after accumulating 12 months of annual falls.

Industrial activity in April was at its lowest level since March 1996, falling to an annual rate of 29.63% and achieved 19-month low. Accumulated 19.87% to May exports are below a year ago.

In May, according to the Mexican Association of the Automotive Industry (AMIA), vehicle production in the country was 22,119 units in May, which is equivalent to an annual drop of 93.7 percent.

Remittances in dollars have also been affected, rising 48.48% monthly during March due to the imminent impact of the pandemic. Flows fell 28.59% in April, as a consequence of the layoffs. Despite this, in April remittances were not affected due to the effect of the depreciation of the peso, which has caused the flow of remittances to rise 26.4% annually in the month.

As for tourism, the impact of the coronavirus was severe, as the containment measures were internal, but also global. The Mexico City International Airport (AICM) reported a 93.7% drop in passenger traffic in May, compared to the same month of 2019.

The fall in May was slightly more pronounced than that observed in April when an annual decrease of 92.8% was reported. In the first five months of the year a contraction of 43.8% accumulates. Other key airports for tourism in Mexico, also observed declines in passenger traffic exceeding 90%.

Finally, investment continues to face severe deterioration, falling at an annual rate of 11.11% during March. During the year, it is expected that gross fixed investment observe an annual contraction of 25 percent.

In the United States, fiscal policy measures were much more aggressive. At the end of the first quarter the largest tax package in its history, equivalent to 2.3 trillion was approved. In the second quarter, the US government continued to expand fiscal stimulus packages.

On April 21, a $ 484 billion package was approved for small business loans and hospital support. For its part, in June the Payment Check Protection Program was expanded in 24 weeks, so that companies that received government support will not have to pay loans any time soon.

The Covid-19 crisis has also been accompanied by unusual events in the financial markets. On April 20 oil had its biggest drop in history, the price of WTI losing 308.43% in one day, falling into negative territory (-40.32 dollars per barrel).

The fall was due to the massive sale of futures contracts expiring on April 21 for the physical delivery of crude in May, at a time when the feared shortage of space for storage.

The pandemic sparked political tensions between the US and China, initially to direct accusations over responsibility for the origin of the coronavirus. Subsequently, on May 27, the United States noted that Hong Kong lost autonomy, jeopardizing the continuity of the “phase one” trade agreement.

On June 8 the National Bureau of Economic Research (NBER, for its acronym in English) said that in February 2020 concluded the phase of economic expansion in the United States went into recession because of the pandemic of the Covid-19. According to the NBER, the expansion that had begun in June 2009 was the longest in the history of the country since records began (1854) lasting 128 months.

The United States Federal Reserve (Fed) kept its target interest rate unchanged, in a range of 0.00-0.25%. However, he mentioned the importance of continuing to expand access to credit.

On June 15, the Fed announced that it will begin comparing corporate bonds to support market liquidity. The transactions will be made through its Secondary Market Corporate Credit Service (SMCCF), which was implemented as one of the 9 measures to combat the pandemic crisis.

The program was announced in March and has the ability to purchase $ 250 billion in instruments.

Regarding economic indicators in the United States, after the fall in GDP to an annualized rate of 5% in the first quarter, a severe drop in inflation has been observed, which stood at a year-on-year rate of 0.1% in May, result of the wide economic slack. Retail sales fell at a monthly rate of 14.7% in April, noting a gradual recovery in May. In April, durable goods orders also fell 17.4% from the previous month.

Employment data showed the most severe impact of the pandemic. In April, 20.5 million jobs in the United States were destroyed, erasing 91% of the jobs created since 2010, the longest period of expansion in that country’s history. For its part, the unemployment rate rose to 14.7 percent.

Since the beginning of the crisis, a gradual recovery of jobs has been observed, although unemployment remains high, causing applications for unemployment support to be above 1 million weekly for 14 consecutive weeks. Ongoing requests from people who are receiving support have only dropped from 20.20 to 19.52 million in the past 14 weeks.

The average scenario of an 8% drop in Mx GDP contemplates that the recovery in the US will start in Q3, something unlikely if the number of cases of covid19 continues to increase. Thus, the balance seems to be tilting towards the pessimistic scenario in Mexico of a 10% drop in GDP. For Mexico, it is expected that during the second quarter an annualized drop of 28% will be observed, while for the United States of 35 percent.

In the first half of 2020, the most depreciated currencies in the broad basket of major crosses were the Brazilian real, with a drop of 34.98%, the South African rand, which depreciated 23.91%, and the Mexican peso, which lost 21.52%. The most appreciated currencies had a moderate advance, standing out the Swiss franc with 1.98%, the Taiwanese dollar with 1.43% and the Japanese yen, with 0.59 percent.

In the second quarter, the most depreciated currencies were the Argentine peso, which lost 9.40%, the Brazilian real with 4.51% and the Turkish lira, with 3.60%. For their part, most currencies gained ground, with the Indonesian rupiah appreciating 12.54%, the Australian dollar at 11.05% and the Russian ruble at 9.43%. In the broad basket of main crosses, made up of 31 currencies, the peso was placed as the 14 most appreciated in the quarter.