The peso starts the session with a depreciation of 2.37% or 47.2 cents, trading around 20.42 pesos per dollar, with the exchange rate touching a maximum of 20.6641 pesos, being the highest daily depreciation of the peso since September 23.

For now, the peso is the second most depreciated currency, behind the Russian ruble, which lost 2.54%, followed by the South African rand with 2.12%, the Norwegian krone with 1.91% and the Brazilian real with 1.87 percent.

For its part, the dollar weighted index shows a strengthening of 0.91%, something not seen since June 11, evidence that the fall of the peso is the result of a general increase in the perception of risk in global financial markets.

The return of nervousness to the markets is due to a new variant of the coronavirus that was detected in the United Kingdom, which has forced several countries in Europe to close their borders.

In the United Kingdom, the Health Secretary warned that the new strain of the coronavirus is “out of control”, so the authorities decided to block the entry and exit of people in London and the south-east of England.

Likewise, countries such as France, Italy, Israel, Belgium, Hong Kong and Canada announced the suspension of flights to and from the United Kingdom. Although for now it is pointed out in the media that the vaccine developed against Covid19 will continue to be effective against the new strain, the risk is that the rate of new infections will accelerate, threatening the ability of the health system to treat seriously ill patients.

The peso and Europe

In the United States, the main indices in the futures market show significant setbacks, so it is likely that the S&P 500 will start with a 1.90% drop, after reaching all-time highs last week.

Risk aversion has also caused an increase in the demand for safe haven assets, such as 10-year Treasury bonds, whose rate fell 5.1 basis points to 0.89 percent.

For its part, gold rose to 1,906.82 dollars per ounce overnight, although it erased those gains and is trading this morning at 1,874.39 dollars per ounce, losing 0.37%, this is due to the fact that the strength of the dollar affects the demand for the metal in the short term. However, gold is likely to regain its uptrend if the pandemic continues to advance aggressively.

It is important to mention that not everything has been negative news during the weekend. Yesterday afternoon the Republican leader, Mitch McConnell, reported that they reached a bipartisan agreement on the new stimulus package of 900 billion dollars, to support the economic recovery.

The package includes direct checks for $ 600, $ 300 a week for unemployment support, financing for the distribution of vaccines, small businesses and airlines, among other support.

Today they will vote in the House of Representatives and the Senate to pass the legislation as soon as possible. This could help curb the declines in financial markets during the session.

Regarding economic indicators, in Mexico the Monthly Survey of Services (EMS) for October showed a monthly growth of 0.73% in total income from the supply of goods and services, showing a significant slowdown after the 3.84% advance observed in September.

At an annual rate, a contraction of 17.5% was observed, accumulating 10 consecutive annual setbacks.

By sector of economic activity, monthly contractions were observed in educational services (-0.16%), real estate and rental services (-0.41%) and in business support services and waste management (-0.63 percent). While, the rest of the categories showed monthly advances.

However, in annual terms, only real estate and rental services and health services show a complete recovery, with annual growth of 1.23 and 7.88%, respectively.

Going forward, significant drops in service revenues are likely to be observed again, especially now that non-essential businesses have been closed again in some states across the country.

It should be remembered that from December 18 until January 10, the State of Mexico, Mexico City and Baja California will remain on red traffic lights.

For their part, retail sales for October registered a 1.37% monthly decline, the first after five months of recovery. In annual terms, retail sales showed a contraction of 7.32%, spinning nine months of setbacks.

By branch of commercial activity, the monthly decline in retail sales of department stores (-16.02%), entertainment items (-12.71%) and of motorcycles and other motor vehicles (-10.45 percent) stands out. 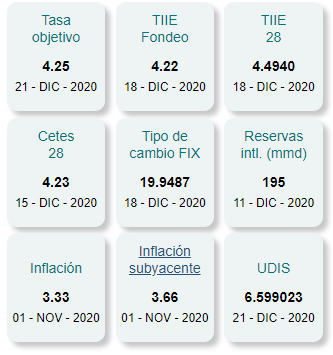 In contrast, the largest monthly increases were observed in sales through the internet (+ 7.45%), articles for interior decoration (+ 6.93%) and beverages, ice and tobacco (+6.78 percent).

To hedge against a depreciation of the peso beyond 20.50 pesos per dollar, a purchase option (call), with an exercise date within 1 month has a premium of 1.39% and represents the right but not the obligation to buy dollars in the aforementioned level.