The peso begins the session with a depreciation of 1.54% or 33.4 cents, trading around 22.03 pesos per dollar, touching a maximum of 22.1445 pesos per dollar and ranking as the most depreciated currency in the basket of main crosses, followed by the South African rand that loses 1.47 percent.

Today is the fourth consecutive session that the peso has lost ground, accumulating a depreciation of 5.48% or 1 peso and 14 cents since the close of last Thursday, September 17.

The weakness of the peso is the result of a strengthening of the dollar during the last four days, in which the weighted index shows an advance of 1.64 percent.

With today’s advance, the dollar-weighted index pierced a key resistance at the 50-day moving average, something that had not happened since March and is the result of a greater preference for dollars as a safe haven currency in the face of recent volatility in financial global markets.

It should be added that one of the main determinants of volatility in recent sessions was the growing number of coronavirus cases in various parts of the world, which threatens to slow down the economic recovery.

These episodes of uncertainty will not stop being a risk for the stability of the markets until there is a definitive solution to the Covid19 pandemic.

Among the factors that could be promoting the strengthening of the dollar, the following stand out:

It is important to note that the performance of global financial markets is mixed, because despite the dollar continuing to strengthen, other markets such as capital markets show sustained gains, advancing on average about 1.5% in Europe, while in the United States the market futures points to moderate gains.

However, this should not be interpreted as an increased appetite for risk, but rather as a correction to losses at the beginning of the week.

Some factors that could be promoting the stability of the capital markets are the following:

It cannot be ruled out that, in addition to the threat of a new wave of the coronavirus, the peso may depreciate due to an increase in the perception of risk in Mexico. Yesterday the deputies of the Labor Party (PT) proposed an initiative of the Pensions Law, in which the Retirement Savings Funds would go to a general fund managed by the government.

The initiative was presented as the “Confederation of Retirees, Pensioners and Older Adults of the Mexican Republic”, the main change would be that the Retirement Savings Systems would be absorbed by the IMSS and the ISSTE, institutions that would administer them under the Distribution Solidarity Fund.

Although Mario Delgado, Morena’s coordinator in Congress, has said that the proposal is impractical, the insistence of political groups to reform the pension system continues to be a factor that could generate risk aversion with respect to Mexico.

Regarding economic indicators, INEGI published the results of the Monthly Survey of Services corresponding to July 2020, which show that total income from the supply of non-financial private goods and services increased 4.9% compared to the previous month, with which they are 25.7% below its level of 12 months ago.

All subsectors showed monthly increases, with the exception of information services in the mass media, which fell 0.8 percent.

The services with the best performance in the month were leisure, cultural, sports and other recreational services, which grew 71.2% compared to the previous month; However, at the annual rate they still show a contraction of 75.9%, as the coronavirus pandemic prevents a complete reopening of the activity.

In annual comparisons, all the subsectors show contraction, due to the economic impact of the pandemic, the most affected being leisure, cultural, sports and other recreational services (-75.9%); temporary accommodation and food and beverage preparation (-53.7%); and transportation, mail and storage (-39.5 percent).

The least affected are health and social assistance services, with an annual fall of -3.5%. The personnel employed in the sector decreased 0.4% in the month, and is 9.8% lower than in July 2019.

For its part, the Monthly Survey of Commercial Companies showed that retail sales continued to recover in July, growing 5.51% per month. At an annual rate, they registered a contraction of 12.66% annually, accumulating 6 months of setbacks.

Although an annual decline continues to be observed, it is a clear contrast to the services sector where the recovery has been slower. 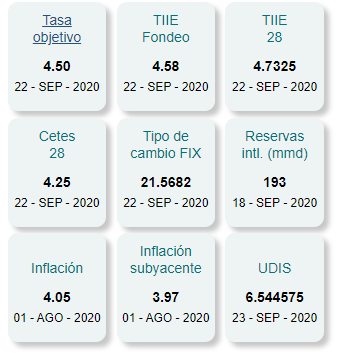 In the interior, the greatest monthly advances were observed in retail sales of footwear (48.73%), textile products, except clothing (39.97%) and clothing and clothing accessories (38.18%), after being one of the most affected with the closure of department stores and shopping centers during confinement.

For its part, wholesale sales registered a monthly growth of 4.51% and an annual contraction of 11.21 percent.

To hedge against a depreciation of the peso beyond 22.5 pesos per dollar, a purchase option (call), with an exercise date within 1 month has a premium of 1.28% and represents the right but not the obligation to buy dollars in the aforementioned level.