The peso was the second most depreciated currency behind the South African rand, which lost 1.17 percent.

In the session, the Global Risk Perception Base Indicator (PPI) stood at 119 units, which means moderate risk perception.

This is due to the volatility that was observed during the session derived from the comments of the president of the Federal Reserve, Jerome Powell, during his participation in the annual meeting of bankers in Jackson Hole.

This caused the components of the currency market, country risk, money, capital and raw materials to show mixed results.

At the Jackson Hole symposium, the Fed chairman unveiled the changes to the monetary policy framework, which will now focus on employment deficits from their peak and not on deviations, as was done previously.

This modification reflects the view of the Federal Reserve, that a robust labor market can be sustained without the concern of increasing inflation.

Regarding the objective of maintaining price stability, it remains at 2% in the long term. However, now it will be sought that inflation averages around 2%, instead of anchoring it at that level.

This implies that, after having had periods of low inflation, monetary policy will allow higher inflation to achieve the desired average.

The market interpreted the message as accommodative and as a sign that the interest rate will remain low for a long period of time.

The Dow Jones registered an advance of 0.57%, while the S&P 500 closed with a gain of 0.17%. The accommodative position of the Federal Reserve did not have an impact on other capital markets globally, where losses predominated.

On the other hand, in Mexico, the minutes of Banxico’s last monetary policy decision were published, in which a less flexible language was observed in the face of recent upward pressure from inflation.

It stands out that the members of the Governing Board observe an uncertain outlook for inflation, with conflicting opinions, which was evident in the fact that one of the deputy governors voted to reduce the rate by only 25 basis points. Going forward, Banxico is expected to continue making cuts, but at a rate of 25 basis points. 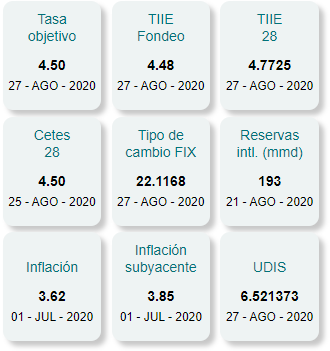 For their part, two members consider that the space to cut rates is shrinking, so they would consider gradual cuts.

Finally, two other members consider that there is room to continue cutting the rate firmly, with the possibility of reaching a real rate close to zero or even negative.