The peso begins the session with a depreciation of 0.94% or 20.9 cents, trading around 22.56 pesos per dollar, as a consequence of an increased perception of risk in global financial markets.

In line with expectations, the paucity of relevant economic indicators at the global level has turned markets’ attention to expectations of economic recovery and the growing number of coronavirus cases, causing losses in capital markets in Asia and Europe.

Among the factors that have caused this movement, the decision of the European Commission to adjust its projection of economic contraction for 2020 from 7.7 to 8.7%, which implies a slower economic recovery in the second half of the year, stands out.

Inland, France, Italy and Spain are expected to contract around 10%. According to Commission officials, despite the initial rebound in the economy, the positive data must be read carefully, as recovery to production levels prior to the pandemic is likely to be slow.

For its part, in Germany industrial activity was published in May, showing an advance of 7.8%, a figure that is below the market expectation of 11.1%, after having fallen 17.5% during April due to the severe impact of the pandemic. The data contributes with the expectation that the economic recovery may be slower than expected.

This morning the price of the WTI also registered a drop in the raw materials market, falling 0.98% to $ 40.23 per barrel and hitting a low of $ 39.90, in expectation of a significant increase in gasoline inventories.

This also contributes to the losses in the exchange market this morning, where the depreciation of the Mexican peso, the South African rand that lost 0.55% and the Brazilian real stand out, with a drop of 0.53 percent.

As for economic indicators, the Monthly Industrial Activity Indicator by Federal Entity corresponding to March 2020 shows annual contractions in the secondary sector in 27 of the 32 states of the Republic, given the initial effects of the pandemic.

It is worth mentioning that the health contingency in Mexico had its greatest impact in April, so these figures do not yet capture the impact of the pandemic.

In the interior, a negative performance of the construction sector was observed, as part of a downward trend that runs from March 2019. However, the deterioration of the manufacturing sector is mainly attributed to the impact of the pandemic on supply chains that was already observed abroad, especially in the United States.

For its part, it was announced that during June the automotive industry showed a rebound after hitting record lows during April and May due to plant closings as it was classified as non-essential.

After the official end of the “National Day of Healthy Distance” on May 30, the automotive industry resumed its operations, allowing the production of 238,946 units, in contrast to 22,199 units in May.

It highlights that the automakers of Audi and Volkswagen were the only ones to continue maintaining low production levels due to restrictions by the Puebla government until the end of June, so they maintained annual falls of 82.5 and 79.7%, respectively, while the rest of the plants show contractions of less than 40% per year. 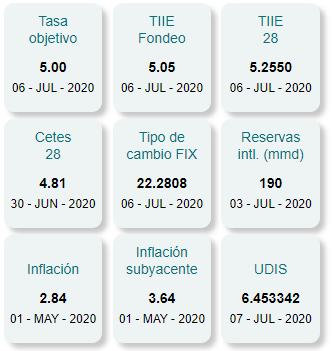 In the money market, yields on 10-year Treasury bonds in the United States and 10-year M-bonds in Mexico remain unchanged, at rates of 0.67% and 5.69%, respectively.

To hedge against a depreciation of the peso beyond 23 pesos per dollar, a call option, with an exercise date within 1 month, has a premium of 1.95% and represents the right but not the obligation to buy dollars in the level mentioned above.