The peso begins the session with a depreciation of 0.80% or 17.9 cents, trading around 22.58 pesos per dollar, after the weekly employment report was published in the United States, corresponding to the week that ended on September 19.

Initial claims for unemployment benefits for the week ended September 19 were 870,000, up 4,000 from the previous week.

Applications have remained near the 850 thousand level for 4 consecutive weeks, showing a stagnation in the recovery of the labor market.

Likewise, the continuous applications for unemployment support, of those people who are already receiving support or continue to wait, decreased from 12,747 million to 12,580 million.

Markets are also reacting cautiously, as new cases of coronavirus are likely to continue to rise during October, at the same time that attention will be focused on the elections in the United States whose outcome is uncertain and which has politicized several things, since the approval from fiscal stimuli until the authorization of a vaccine against the coronavirus.

President Donald Trump said he could override any restrictions that the Food and Drug Administration (FDA) issues around the authorization of the vaccine. Trump has said on several occasions that the vaccine will be ready by the end of October.

The foregoing encourages investors to continue taking positions in lower-risk assets and to abandon positions in capital market instruments and currencies from emerging economies.

If nervousness continues, the exchange rate will continue to face upward pressure, approaching levels of 23.00 pesos per dollar in the short term.

Globally, the news about new cases of coronavirus and the implementation of restrictions continue.

In Europe, governments have again issued contingency measures in the face of the increase in coronavirus cases.

Yesterday France, again introduced restrictions not seen since May, including the closure of bars and restaurants at 10 pm, in Paris and other cities.

“If we do not take action quickly, we run the risk of being in a critical situation in some regions within a few weeks,” said the French Minister of Health.

The foregoing encourages capital markets in Europe to show moderate losses with an average decline of 0.20%, and it is likely that the United States will again see losses in the capital market.

It should be added that the futures market shows greater weakness for issuers in the technology sector.

Regarding economic indicators for Mexico, in the morning it was published that, during the first fortnight of September, biweekly inflation was 0.16%, the lowest fortnightly increase in prices for the same period since the series began in 1988.

In the interior, the underlying component presented an increase of 3.99% year-on-year, driven by both the biweekly inflation of merchandise (0.16%) and services (0.16 percent).

For its part, the non-core component registered an inflation of 4.44% year-on-year, where the highest fortnightly increase in prices was observed in the tariffs authorized by the government of 0.30 percent.

In addition, agricultural products continued to show upward pressure, with a biweekly inflation of 0.17%. The products with the highest inflation rates were onion (23.55%) and serrano pepper (12.37%). In general, despite the fact that year-on-year inflation was above Banco de México’s target of 3% +/- 1%, its upward trend has moderated. Banco Base estimates that inflation at the end of the year will be 3.75 percent.

For its part, the National Survey of Construction Companies for the month of July showed a monthly increase of 1.1% and an annual contraction of 21.9 percent.

The subsector most affected was specialized works for construction, whose production contracted 33.6% compared to the same month of the previous year, followed by construction of civil engineering works, with a drop of 32.2%, and building, which fell 24.5%. hundred. 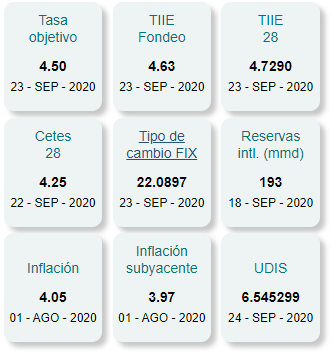 In the accumulated from January to July, the value of the production of the sector shows an annual contraction of 24.6%. It is worth mentioning that construction was already showing significant contractions since before the pandemic.

Derivatives market and the peso

To hedge against a depreciation of the peso beyond 22.5 pesos per dollar, a purchase option (call), with an exercise date within 1 month has a premium of 1.82% and represents the right but not the obligation to buy dollars in the aforementioned level.