The peso begins the session with a depreciation of 0.53% or 11.9 cents, trading around 22.75 pesos per dollar, the sixth consecutive session that the peso loses ground against the dollar.

In the rest of the financial markets, the day is mixed, as market participants show caution in anticipation of a second half of the week, which could be volatile due to the following factors:

The monthly report of employment in the United States. On Friday, the July non-farm payroll will be released, where the increase in the number of coronavirus cases is likely to have had an impact on job creation.

It should be remembered that the applications for unemployment support showed a jump in the last fortnight of the month, so there is the possibility of seeing a deterioration in the US labor market.

President Trump reported that he could intervene through an executive order to approve the new stimuli.

Political tensions between the United States and China. Exchanges between the two powers continue, related to the suspension of the Chinese application TikTok from the US market due to the suspicion of data theft.

Yesterday, Trump announced that if no American company acquires the rights to this application, it must suspend its operations by September 15.

The US president added that the purchase of TikTok operations should include a percentage for the United States government, which the Chinese press called a “robbery.”

The peso and raw materials

In the commodities market, oil starts the session with losses derived from nervousness about its supply and demand fundamentals, due to the increase in oil production by OPEC and its allies (OPEC +) and the increase in the number of cases. of coronavirus globally.

On the other hand, in Mexico some relevant economic indicators were published. The Mexican Association of the Automotive Industry (AMIA) published the domestic sales of light vehicles, which amounted to 72,897 vehicle units in July.

This data is above the 62,837 reported for June, although 31.3% below that reported in July 2019. It is important to remember that this series does not have some type of seasonality adjustment, so it may not be comparable with the month. immediately previous.

Likewise, the Composite Indicators System (SICCA) was published, where the Coincident Indicator revealed that the economy continued to contract during May, reaching 75.7 points, a level not observed since August 1996. 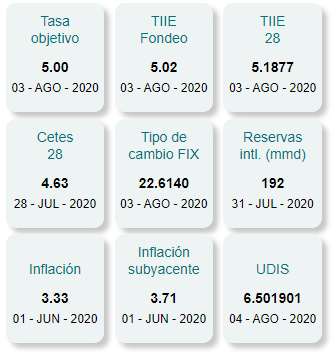 Under this approach, the economy has been in a recessive stage since November 2018, which is equivalent to 19 months and represents the longest duration of a contracting cycle. Likewise, the Coincident Indicator of the Cyclical Indicators System (SIC) adds 12 months below the expansion threshold, reaching 89.82 points.

To hedge against a peso depreciation beyond 23 pesos per dollar, a call option, with an exercise date within 1 month, has a 2.10% premium and represents the right but not the obligation to buy dollars in the level mentioned above.