The peso closed the session with a depreciation of 0.47% or 10.5 cents, trading around 22.43 pesos per dollar, given a deterioration in sentiment in global financial markets, after initial requests for unemployment support in the United States this morning were placed at 1.30 million during the previous week, decreasing only by 10 thousand requests compared to the previous week and above the 1.25 million requests expected by the market.

This implies that the recovery in the US labor market may be stagnating and will probably be slower than expected.

As of the previous week, applications for unemployment support have been above 1 million for 17 consecutive weeks.

This increases the probability that a further increase in permanent unemployment will be observed in July.

Markets have also turned their attention to the growth in the number of coronavirus cases in the United States.

For its part, in Pennsylvania new confinement measures were implemented, severely limiting the occupancy capacity of restaurants and other meeting points.

The depreciation of the peso is also due to a drop in the price of oil, with the WTI losing 1.12% to $ 40.74 per barrel, due to OPEC’s plan to increase oil production by at least 1.9 million barrels per day, at the same time. that the expectation of a weak demand for fuels is maintained.

Along with the peso, most currencies lost ground against the dollar, with the South African rand being the most depreciated with a fall of 0.90%, followed by the Russian ruble with a depreciation of 0.71 percent.

Losses were observed globally in the capital market, from Asia where the Shanghai CSI 300 index fell 4.81%, after June retail sales in China showed an annual contraction of 1.8%, contrary to a recovery of 0.5 expected by the market. 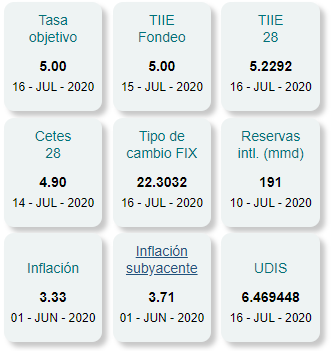 In Europe, the main indices lost 0.50% on average and in the United States, the S&P 500 lost 0.34% and the Dow Jones lost 0.50%. In the session, a clear increase in the demand for risk-free assets was observed, causing the 10-year Treasury bond rate to drop 1.5 basis points, standing at 0.61 percent.