The peso starts the session with a depreciation of 0.50% or 10.9 cents, trading around 22.22 pesos per dollar, given an increase in the perception of risk in global financial markets.

Performance is mixed in the foreign exchange market, so the dollar-weighted index remains stable.

However, several currencies of emerging economies such as the Turkish lira with 0.80%, the Russian ruble with 0.74% and the South Korean won with 0.48 percent are losing ground.

In contrast, the most appreciated currency is the Swiss franc, which advanced 0.51%, in the face of a moderate increase in the demand for safe-haven currencies, while the Japanese yen advanced 0.19 percent.

Generalized falls are also observed in capital markets, with the main European indices losing an average of about 1.1% and in the United States the futures market points to a negative opening with setbacks close to 0.25 percent.

The nervousness of the financial markets is due to the fact that the Federal Reserve minutes, published yesterday at 1:00 p.m., reminded the market of the existence of risks to the economic recovery of the largest global economy, the main risk being the coronavirus.

While new coronavirus cases appear to have stabilized for the time being in several US states, in Europe they are re-emerging, prompting governments to re-impose restrictions to prevent a second wave.

Among the countries that have shown a greater increase in cases, Spain stands out, where 4,800 infected in one day were confirmed, a new maximum since April. On the other hand, 1,500 infections were reported in Germany, a figure not seen since May.

The peso, the Fed and oil

On the other hand, the Fed minutes aroused nervousness associated with the electoral process in the United States, as it highlighted the importance of continuing to support the economy through an expansive fiscal policy and for now, due to political factors, congressional leaders Americans have not reached an agreement to approve another fiscal stimulus package.

Regarding economic indicators, in the United States, applications for unemployment benefits for the week ended August 15 were once again above one million at 1,106 million, increasing by 135 thousand compared to the previous week’s figure, above of market expectations.

On the other hand, the continuous applications for unemployment support, from those people who are already receiving support or continue to wait, decreased from 15,480 million to 14,844 million.

In Mexico, the Telephone Survey on Consumer Confidence (ETCO) for July showed an advance of 2.4 points compared to June, reaching 34.4 points.

The indicator continues to advance slightly, reflecting a bit of optimism regarding the partial reopening of the economy, after reaching its lowest level in record of 31.1 points in May, the second month of confinement. 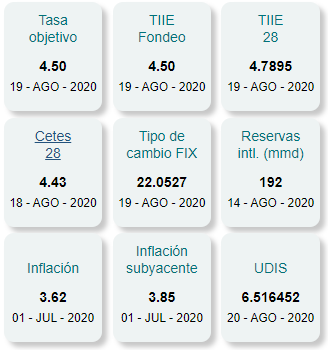 Consumer Confidence still remains 8.9 points below that observed in July 2019 (ENCO). Within the ETCO, the low values ​​on the possibility of consumption of durable goods and the current economic situation of the country stand out, with 15.7 points and 28.5 points, respectively.

The foregoing is consistent with the behavior observed during periods of crisis, where people show greater caution in their spending in the face of uncertainty about their future income, focusing on the consumption of essential goods.

To hedge against a depreciation of the peso beyond 22.50 pesos per dollar, a purchase option (call), with an exercise date within 1 month has a premium of 1.90% and represents the right but not the obligation to buy dollars in the aforementioned level.