In the last four sessions, the peso accumulates a depreciation of 7.31% or 1 peso and 53 cents.

It should be noted that four consecutive sessions with depreciation of the peso of 1% or more, has only occurred six times since the free float regime began: one right now, another in August 2015 and the other four in January 1995, February 1995 and twice in March 95.

Despite the fact that the Mexican peso is a volatile currency, as it is the most liquid in all of Latin America, the movements in recent days are unusual

In the foreign exchange market, the Mexican peso was the most depreciated currency during the session, although most currencies lost with the exception of the South Korean won, which advanced 0.06 percent.

After the peso, the most depreciated currencies were the Brazilian real with 2.03%, the South African rand with 1.72% and the Norwegian krone with 1.61%. The dollar weighted index advanced 0.72% during the session, reaching levels not seen since the beginning of August.

The depreciation of the peso was due to:

The Federal Reserve has identified the implementation of expansionary fiscal measures in the United States as key to continuing the economic recovery. Likewise, the comments made recently by the president of the Fed, Jerome Powell, and by the presidents of some regional offices of this central institution, have been around the need for new fiscal stimuli by the US government to prevent the recession generated by the coronavirus pandemic is prolonged. The foregoing, coupled with the fact that the current political context in the United States revolves around the elections, is beginning to generate sentiment in the market that the approval of a new fiscal stimulus could be delayed due to the growing tensions between the Republican and Democratic parties .

The Federal Reserve’s stance on monetary policy. Since Tuesday there has been talk about the possibility of the Fed raising the interest rate even before the average inflation target of 2% is reached. This stance increases the probability that the interest rate differential against the United States will decrease, in turn reducing the attractiveness of holding investments in currencies other than the dollar.

A greater perception of risk over Mexico, after the initiative of the Pensions Law proposed by the deputies of the Labor Party (PT), in which the Retirement Savings Funds would go to a general fund managed by the government. Although this initiative is unlikely to prosper, the insistence of political groups on the issue so far this year could heighten investors’ nervousness and affect portfolio investment flows to the country.

The first two factors have generated uncertainty in global financial markets, such as the US capital market, where the Dow Jones lost 1.92% and the NASDAQ fell 3.02 percent. 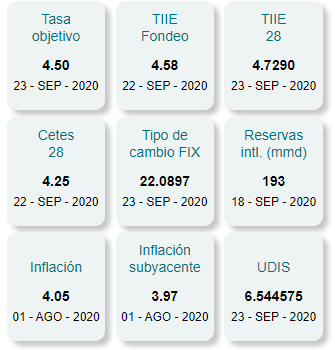 In the foreign exchange market, investors perished to take refuge in the dollar, strengthening it against most of its main crosses.

Going forward, news about the advance of Covid-19 or news about a stagnation in the global economic recovery, could cause new episodes of risk aversion, causing increases in the exchange rate.